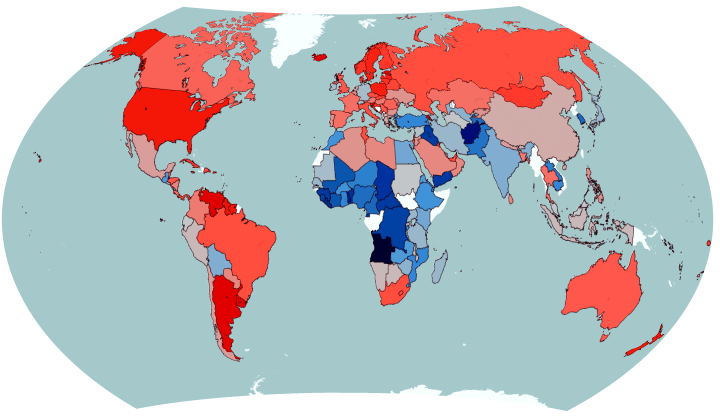 The darker red a country is, the longer women stay in education (at all levels) relative to men and vice versa for the blue countries. Keep in mind that it’s looking at relative differences within countries and not years of education between them.

The map is based off the map below by reddit user JurijFedorov who used 2013 data from UNESCO along with bits of data from the CIA World Factbook.

Barbados has the most extreme difference with women staying in education for 3.4 years longer then men. At the other extreme is Angola where men have on average 5.3 years more schooling than women.

Somewhat surprising results include Saudi Arabia where women stay in school longer than men. Germany, Ireland, South Korea and Japan are also surprising as they the few high-income countries where men spend more years in education than women.

Here are the differences in years of education for a few countries:

You can find a full interactive map here.

You can also have a look at the original map here:

If you liked this map you may also be interested in the following books:

Why do you think women are now staying in school longer than men? Leave your comments below: