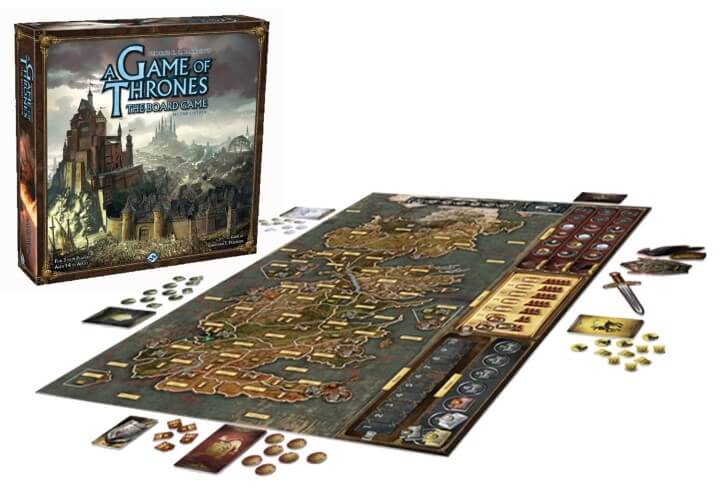 With so many different Game of Thrones board games to choose from, plus all the expansions, it can be a bit difficult to pick the best. Games include such favourites as the A Game of Thrones: The Board Game, Risk, The Card Game and even Monopoly.

We’ve ranked the games and expansions from best to worst based on their review score found on BoardGameGeek. Please let us know what you think in the comment section below.

1. Best: A Game of Thrones: The Board Game (Second Edition)

The second edition A Game of Thrones: The Board Game is far and away the best rated of all the Game of Thrones board games. If you’ve never played before, here’s a brief description:

King Robert Baratheon is dead, and the lands of Westeros brace for battle. Can you claim the Iron Throne? Designed for ages 14 and up, A Game of Thrones: The Board Game Second Edition is a classic game of warfare, diplomacy, and intrigue for three to six players.

Taking control of the well-known characters from George R.R. Martin’s beloved fantasy series, players must fight for dominance of the realm. Will you take power through force, coerce your way onto the throne with persuasive speeches, or rally the townsfolk to your side?

With opportunities for strategic planning, masterful diplomacy, and clever card play, this game gives you a host of ways to spread your influence over Westeros.

This board game includes clear, detailed rules to guide you through setup and gameplay. Play begins when each person receives an army of footmen, knights, siege engines and ship units as well as a set of order tokens and other necessary components.

Each player also receives a deck of unique house cards, which represent important characters from A Song of Ice and Fire and are used as leaders in battles against rival houses.

Buy: Click Here to buy A Game of Thrones: The Board Game (Second Edition) on Amazon

Other editions: A Game Of Thrones (First Edition)

A Game of Thrones: The Board Game Expansions

If enjoy playing either edition of the board game, you might also be interested in the following expansions. Please pay attention to the edition of the game the expansion is for, since they won’t always work properly with the other edition.

2. A Game of Thrones: The Card Game (Second Edition) 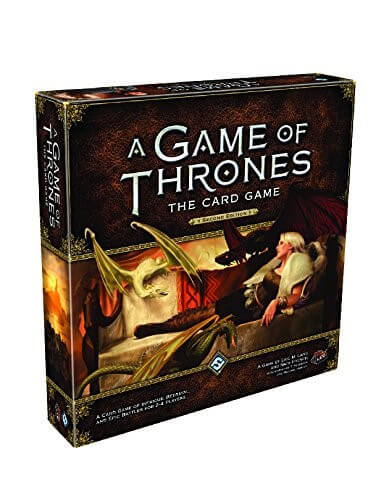 The second edition of A Game of Thrones: The Card Game is a Living Card Game of deadly battles, cunning intrigues, and the struggle for power.

In the game, two to six players take command of the factions of Westeros and fight to claim the Iron Throne, using the iconic characters of George R.R. Martin’s A Song of Ice and Fire.

Every turn, you hatch a new plot, then attack your foes in three types of deadly challenges. Whether you play a head-to-head joust or a multiplayer melee, your struggles span the field of battle, cunning intrigues, and political machinations.

Call your banners and battle for the Iron Throne!

Buy: Click here to buy A Game of Thrones The Card Game Second Edition on Amazon

Other editions: A Game of Thrones: The Card Game (First Edition)

A Game of Thrones: The Card Game Expansion & Chapter Packs

Both editions of The Card Game have a lot of expansion and chapter packs. Please make sure you pay attention to which version of the card game you have before buying any.

3. Risk: Game of Thrones Board Game 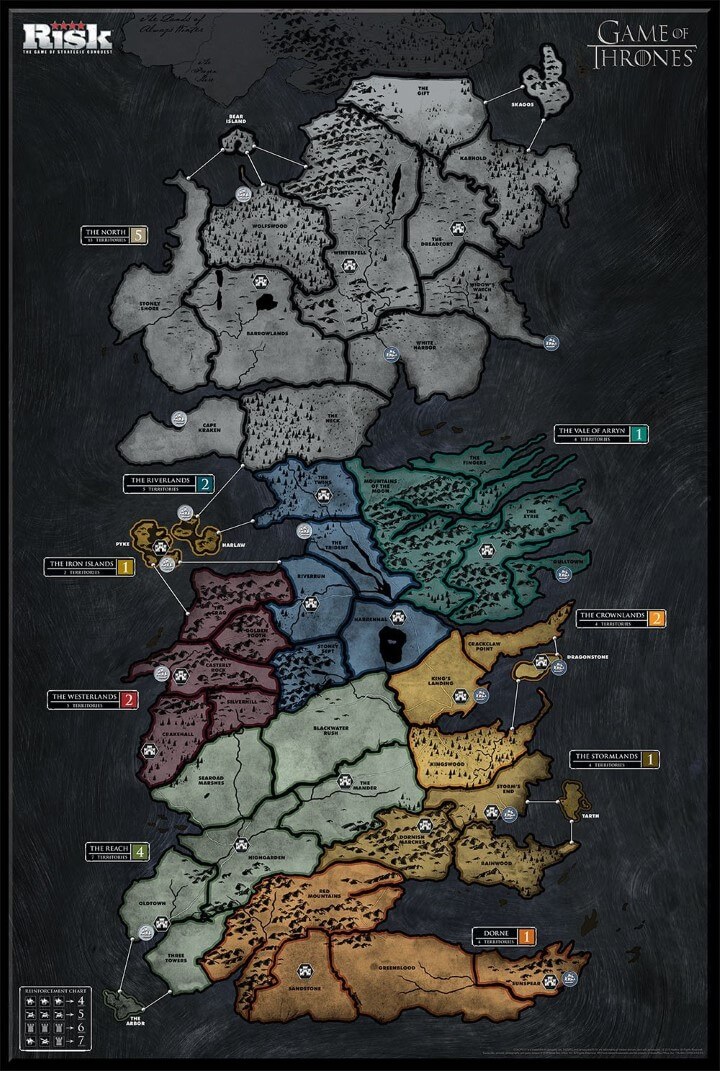 Game of Thrones RISK, based on the epic HBO series, features two ways to play, including factions of noble Houses vying for control of Westeros during the time of The War of the Five Kings, as well as Daenerys Targaryen’s rise to power in Essos.

Buy: Click here to buy Risk: Game of Thrones Board Game on Amazon 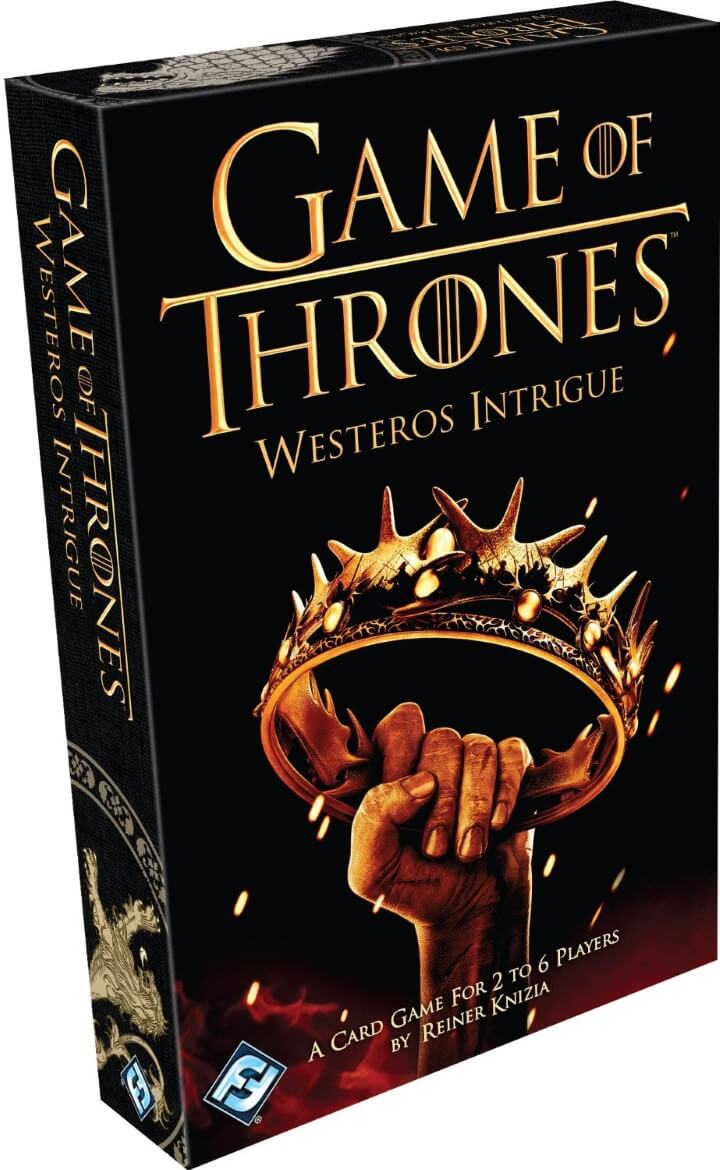 Coming in at number 4 is Game of Thrones: Westeros Intrigue described as:

Plot and scheme your way to the Iron Throne in Game of Thrones: Westeros Intrigue, a fast-paced card game for two to six players based on HBO’s Game of Thrones TV series. In this game, you manipulate iconic characters by playing character cards.

If your conspiracy can influence characters longer and more effectively than your opponents, you get closer to becoming the new power behind the Iron Throne. If your opponents can outwit you, however, you lose the round and take penalty points.

Played over a series of rounds, Game of Thrones: Westeros Intrigue offers fast fun for all ages. Prepare to intrigue and backstab your way to the Iron Throne! 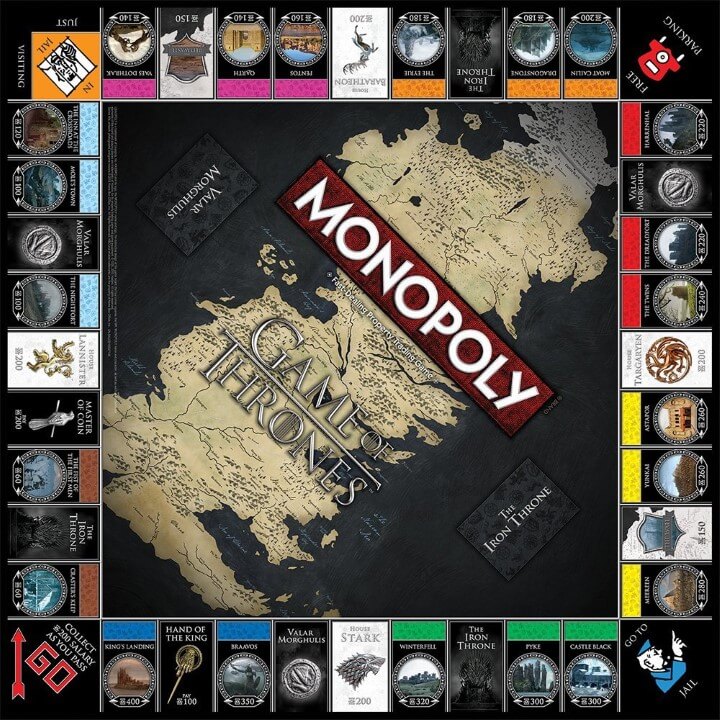 A special Game of Thrones edition of Monopoly just squeaks into the top 5. It is described as:

6. Game of Thrones: The Trivia Game 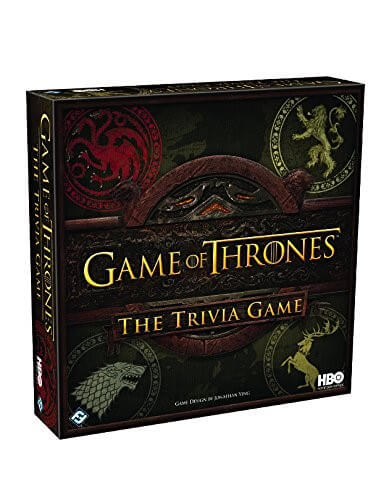 Finally, we have the Game of Thrones: The Trivia Game:

In the game of thrones, knowledge is as powerful a weapon as Valyrian steel or dragons fire. Without wielding swords, ambitious characters including Tyrion Lannister, Petyr Baelish, and Olenna Tyrell successfully navigate deadly political upheavals and wars.

What you know will likely benefit you and even cripple your opponents but, in the words of Petyr Baelish, “what we don’t know is what usually gets us killed.”

Game of Thrones: The Trivia Game lets you use your knowledge to compete for the Iron Throne. You and your friends answer questions about the first four seasons of the hit HBO series in order to conquer key locations in Westeros.

Whoever controls the most locations in the Seven Kingdoms wins! Choose more difficult questions to immediately gain more control over a location, accumulate resources to earn the favor of iconic characters, and cunningly make and break alliances with other players.

Questions are organized by season to ensure that your game is free from spoilers. With over 1,200 questions included, you are certain to find fresh challenges and learn new details about Westeros with every game.

Which is your favourite Game of Thrones game? Let us know in the comment section below. Know someone who would enjoy this post? Please help them by sharing it: