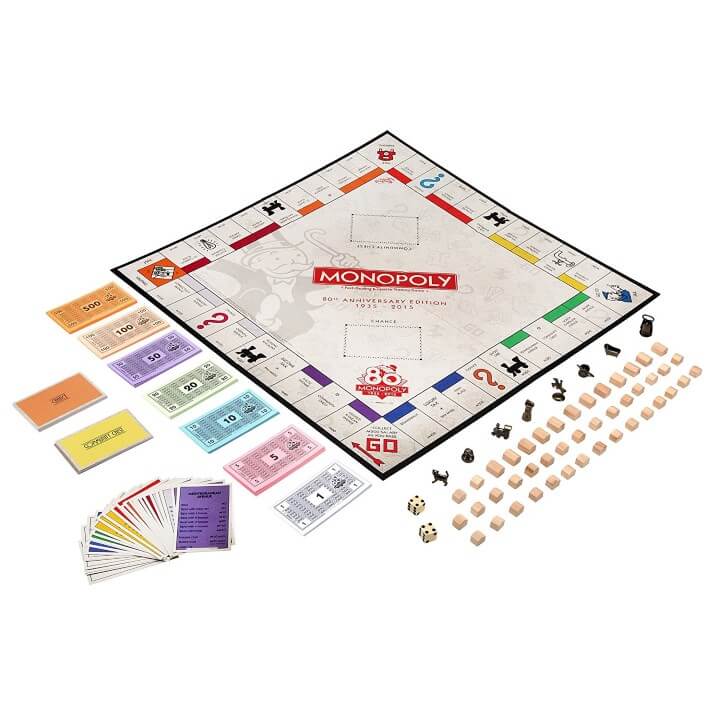 Monopoly is one of the most popular board games of all-time. And that popularity has translated into countless different versions, editions and variations of the game.

Below we look at 21 unique versions you can buy online.

Everything from an 80th anniversary edition of the Classic Original to Empire to Junior to the Ultimate Banking Edition and so many more.

If you like Monopoly, then there’s bound to be a version you haven’t played below: 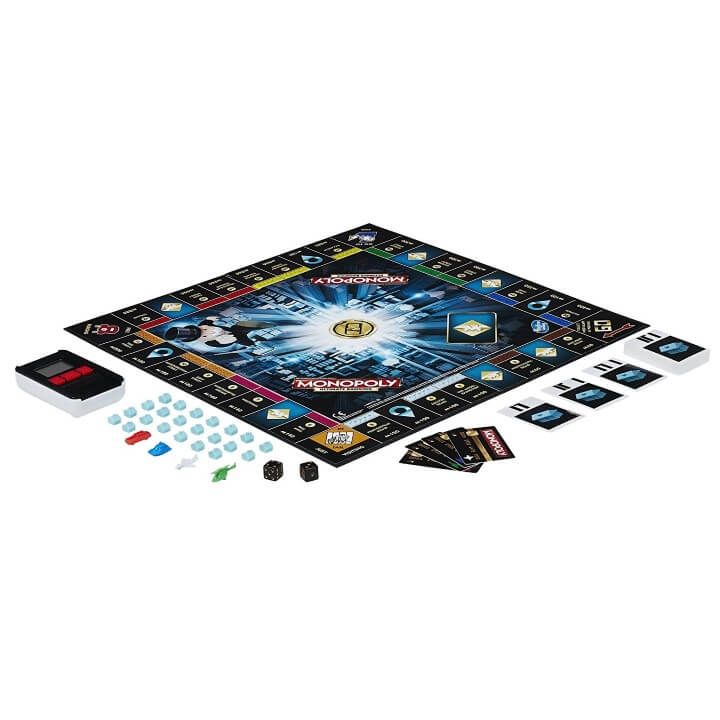 Description: Introducing a modern banking version of the Monopoly game: the Ultimate Banking Edition. In this edition, Monopoly money is no more!

Each player gets a bankcard and the Ultimate Banking unit keeps track of everyone’s fortunes. It also scans the game’s property cards and can boost or crash the market.

Traditional Monopoly play gets amped up with this edition — the game introduces Event cards and Location spaces instead of Chance cards and Community Chest cards. Land on an Event Space, and rents may be raised or lowered, a player may earn or lose money, or someone could get sent to Jail.

Location Spaces allow players to pay and move to any property space on the gameboard. Challenge friends and family to win it all with the Monopoly Ultimate Banking game! 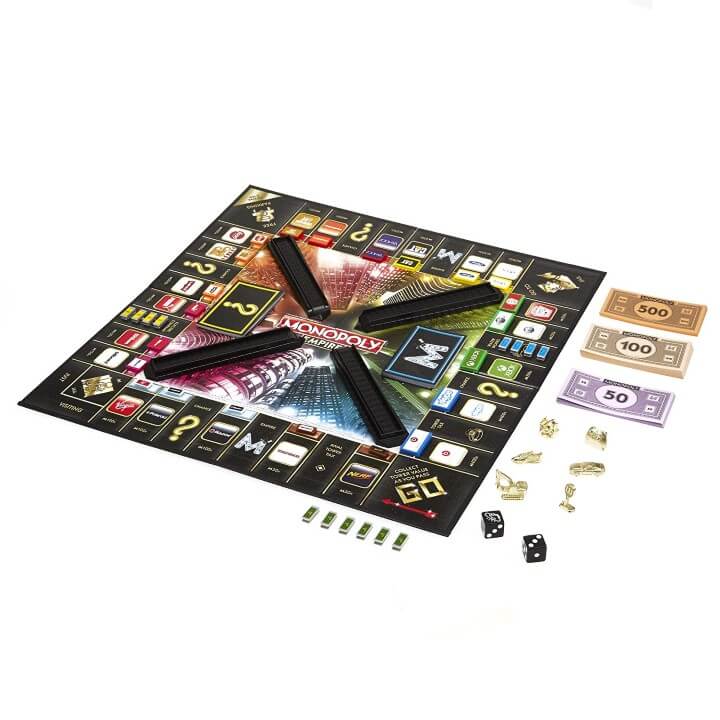 Description: In the Monopoly Empire game, players can own the world’s top brands. After choosing one of the uniquely branded tokens, players move around the board, and start building their empires.

The game is a race to the top as players buy their favorite brands one by one and fill their towers. Players can own famous brands, including Nerf, Transformers, Levi’s, and more.

Opponents collect rent from their rivals; the higher their tower, the more they can charge! For two to four players, the first player to fill their tower with billboards wins! 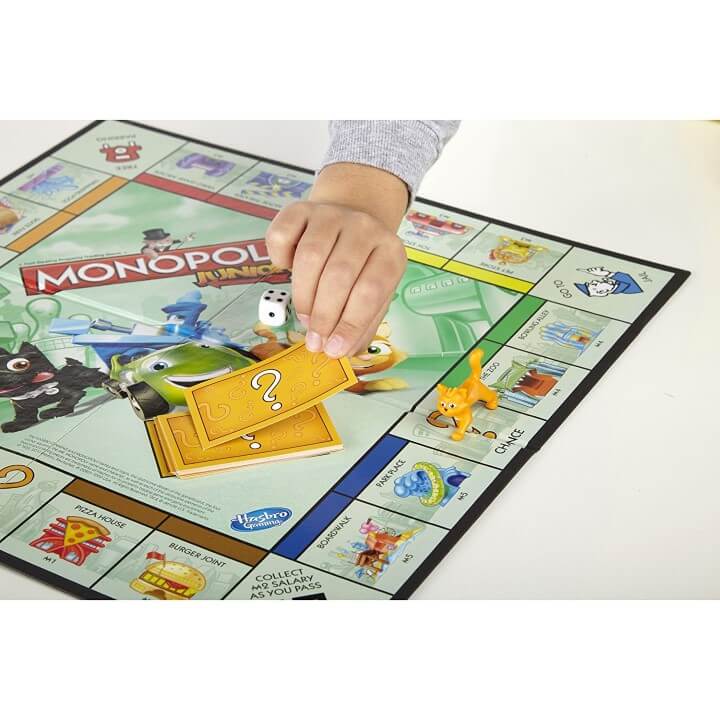 Description: The first Monopoly game for kids, where they can earn money the fun way! The Monopoly Junior game is just like the classic Monopoly game, but it’s accessible and exciting for younger players.

This anniversary version of the classic fast-trading property game features tokens from the 1930s all the way to the 2000s! with a retro game board and cards, the game takes you back to when it all began, but you still have to build your houses and hotels and see if you can bankrupt everyone else.

You better keep an eye on your money, because you never know when the dice will land you with a massive rent bill to pay. Sometimes staying in jail can be the safest place to be, but only after your properties are primed to make you money.

You’ve got to buy, sell and negotiate to win at this 80th anniversary version of monopoly! 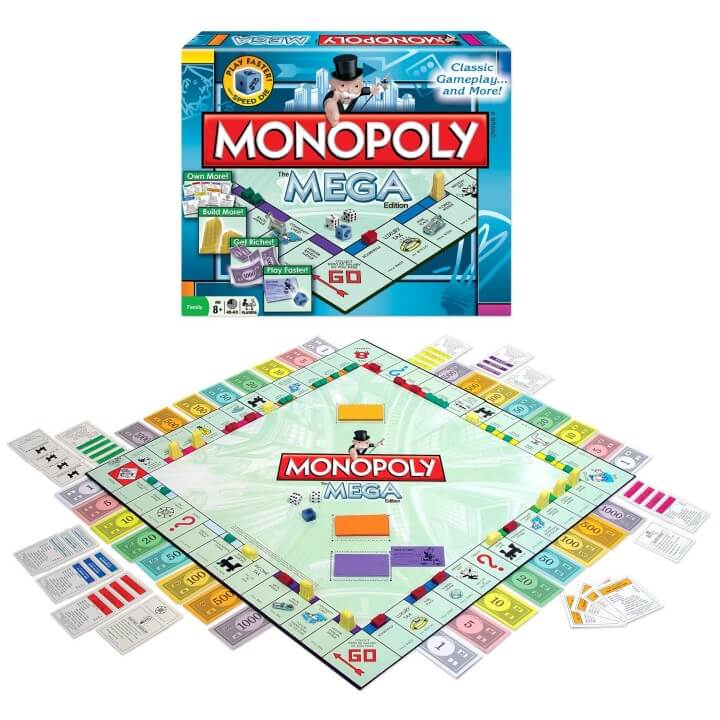 Description: Everyone loves the timeless game-play of Monopoly. Now, with Monopoly: The Mega Edition, you’ll be able to own more properties, build more buildings, handle more cash, and amazingly play faster than ever before!

This exciting updated edition of the classic board game can be played in just an hour and a half thanks to its speed die and bus cards that make the action faster and more intense.

Buy: Click Here To Buy The Mega Edition on Amazon 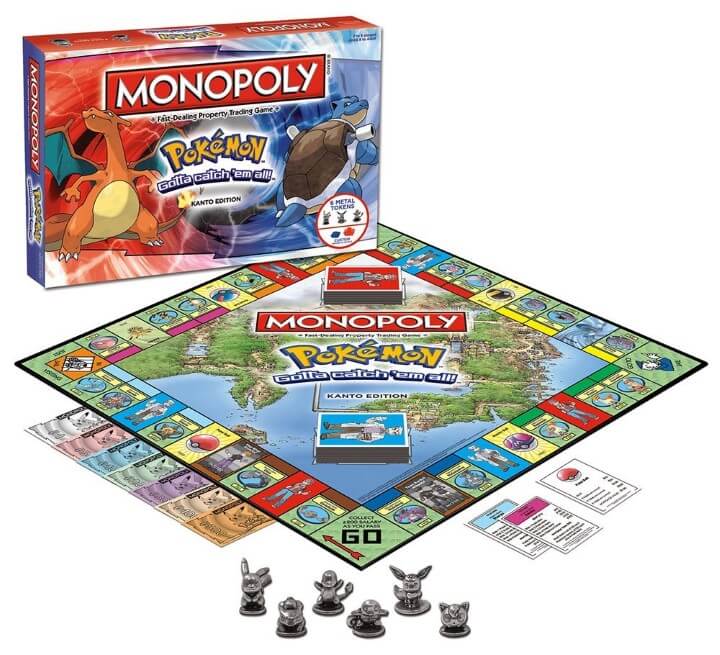 Description: In this special Pokémon: Kanto Edition of Monopoly you’ll travel through all eight gyms and battle Gym Leader Pokémon. Trainer Battle and Professor Oak cards might reward you for Pokémon encounters, or bring an unexpected surprise.

Buy, sell and trade with other Pokémon Trainers to get a powerful Pokémon team and win the game! 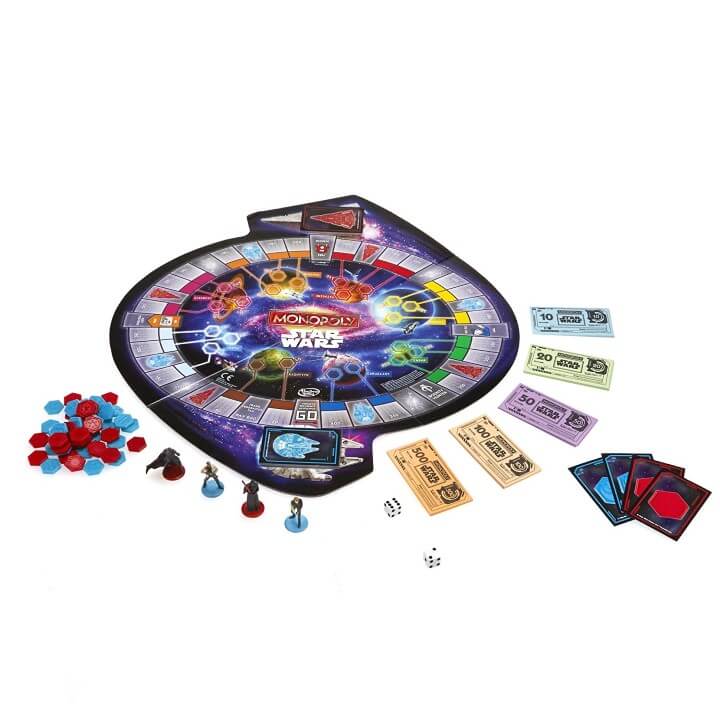 You can play on the Rebel or the Empire side, and your mission is to conquer planets and build bases so you can dominate the universe!

When players land on your planets, they owe you rent – but the same is true when you land on theirs! 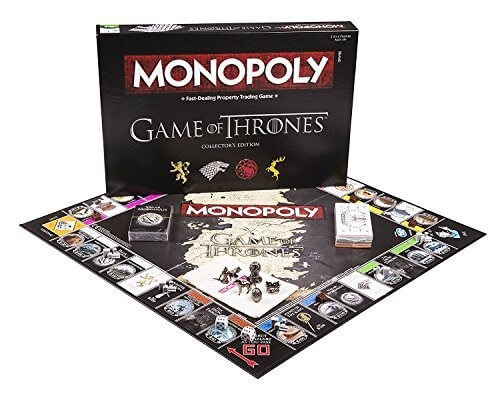 After all, when you play the MONOPOLY: Game of Thrones Collector’s Edition Game you win, or you go bankrupt!

See other Game of Thrones Board Games here.

Description: This Monopoly game goes where no board game has gone before. Based on Star Trek: The Next Generation, it features squares with pictures of the Borg and Data instead of Park Place or Boardwalk.

Only the four corner squares–Go, Free Parking, Go To Jail, and the Jail–remain from traditional Monopoly, though most game rules are essentially the same.

For Trekkers and sci-fi enthusiasts, this is warp-drive Monopoly. Instead of buying properties, players make alliances with alien species. They move around the board as members of the Enterprise crew and pay their way with Gold Pressed Latinum bars–the 24th-century’s idea of money.

Both fans of Star Trek: The Next Generation and Monopoly-loving folk will enjoy this new twist on an old game. A full-color alien species guide is included.

10. Lord of the Rings Trilogy Edition 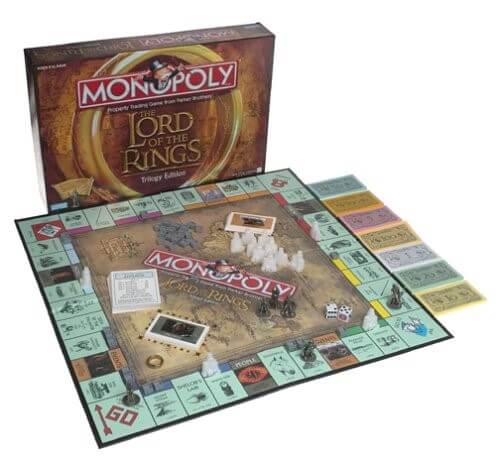 Description: Make the journey with the Fellowship and claim the territories of Middle-earth in this special edition of the classic MONOPOLY Game.

Gather power as you move in and out of these territories, building strongholds and fortresses to secure your holdings. You may even acquire relics such as the staffs of the wizards.

Become the most powerful player throughout middle-earth to be the winner.

Includes 6 collectible The Lord of the Rings tokens.

Buy: Click Here To Buy The Lord of the Rings Trilogy Edition On Amazon 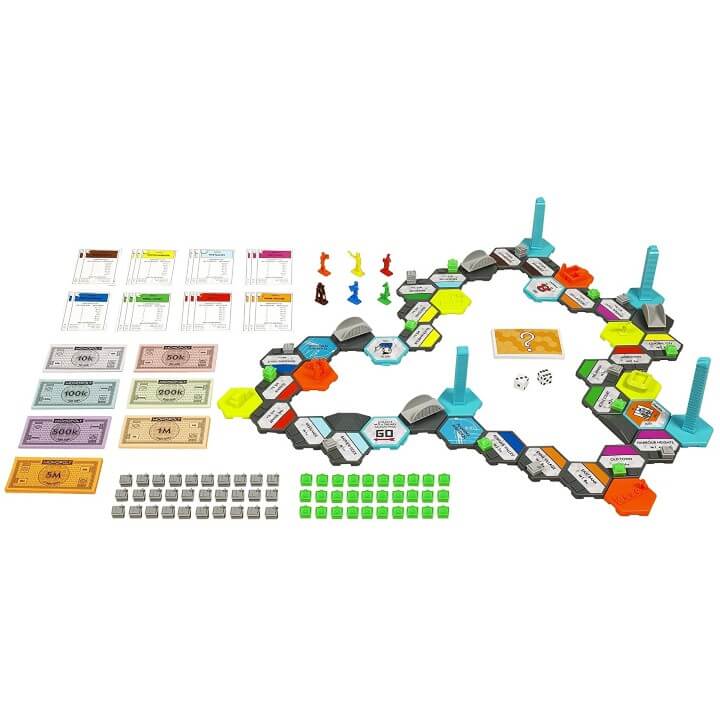 Description: The classic buying, selling, building games is completely under your control!

Choose how long you want to play and then build the track to match.

For shorter games, set up the Starter track and for longer-lasting fun, choose the classic track. Or get creative!

Change the order of your tiles and the shape of your track to create a totally unique freestyle game adventure.

The awesome, high-stakes real estate action fun is the same, but the tracks you play it on can always be different. 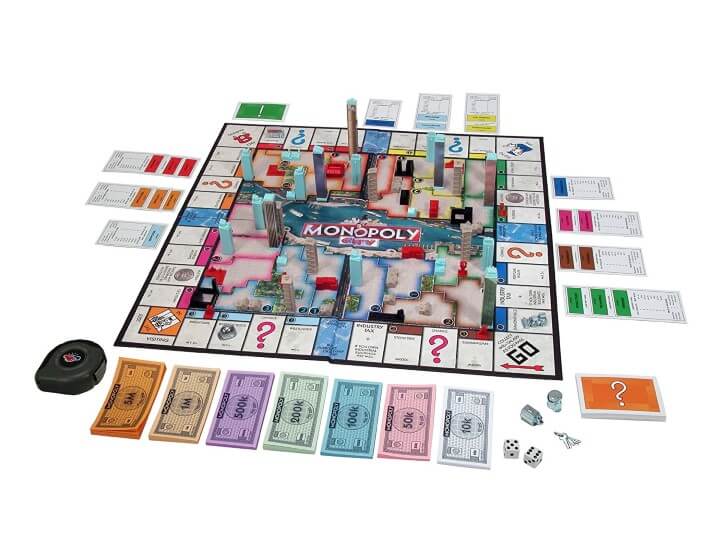 Description: Monopoly City is exactly like classic Monopoly in lay out, rules, and gameplay–roll the dice, move your character around the board, and try not to spend too much time in jail or go bankrupt! However Monopoly City has also made several neat changes, with newly named properties, new monetary values, futuristic buildings, and new playing cards.

Whereas with the original version of Monopoly Park Place was one of the most prestigious properties to own–with Monopoly City you will be striving to acquire a permit for the fancy Fortune Valley.

The buildings are modern and 3-D, and the currency has much higher values, ranging up to five million dollars–no small change here!

Instead of property deeds, you acquire permits for the zones you’d like to build in, and this latest version also includes an electronic trading unit, making it possible to hold “public” or “private” auctions for your properties and districts. 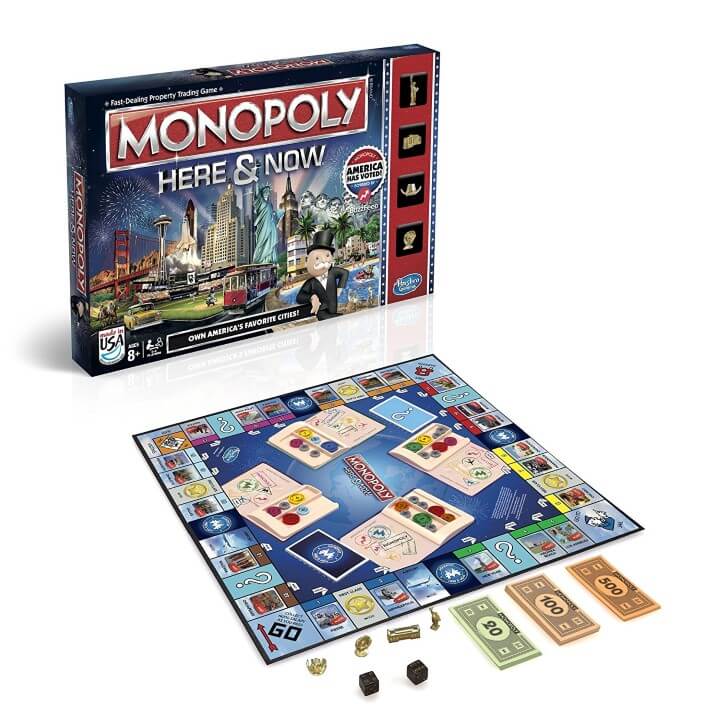 Description: In this fast-paced version of the Monopoly game, players race around the board visiting cities and collecting passport stamps. The first player to fill their passport wins!

The gameboard features favorite cities like Seattle, New York, and Denver. The game also includes 4 iconic tokens: the Statue of Liberty, a baseball glove, a trolley, and a cowboy hat.

Every time someone adds another stamp to their passport, they get closer to winning! Monopoly Here and Now game: a game can be played in approximately 30 minutes. 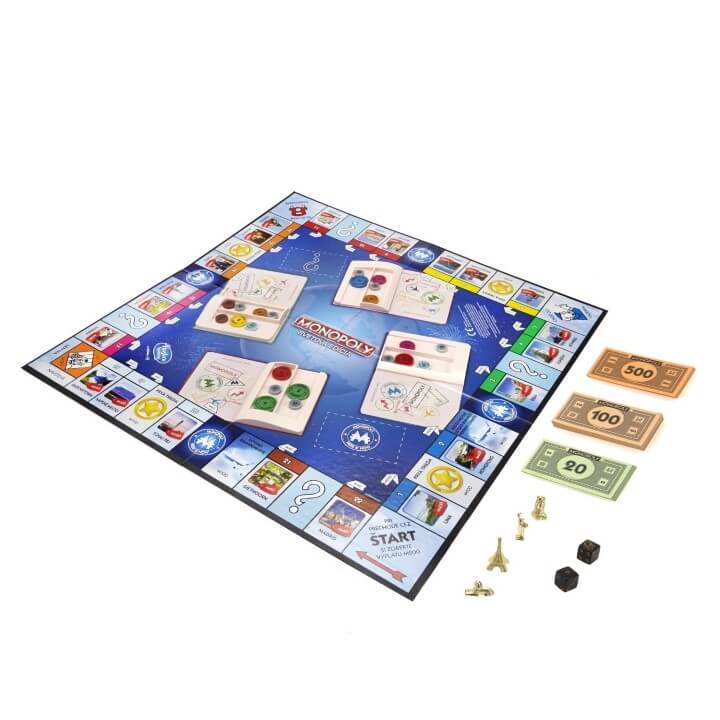 Description: Own the world’s favorite cities in this Here & Now version of the fast-trading property game, Monopoly! The jet-set gameplay will be epic as you race around the world to visit the world’s most exciting places and buy locations.

Every time you add another stamp to your passport, you get closer to the globetrotting win! 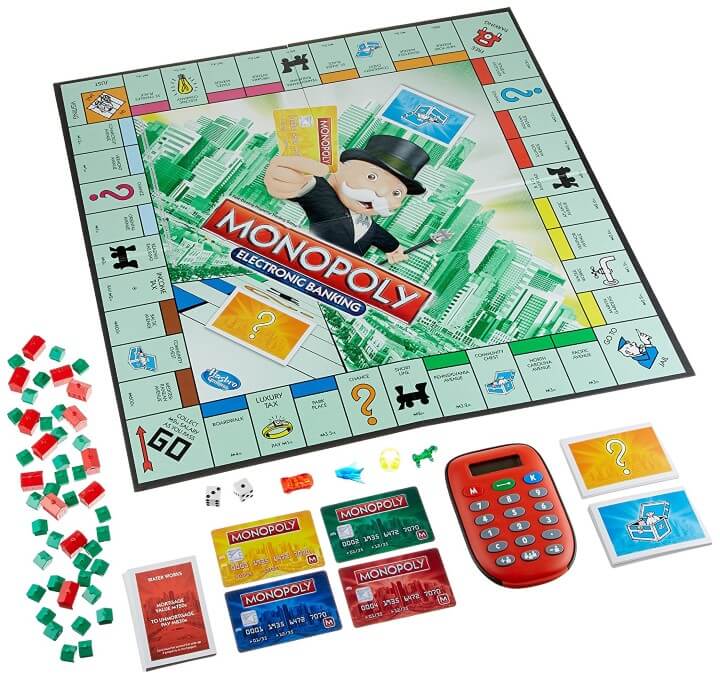 Description: Wheel and deal your way to a fortune even faster using debit cards instead of cash!

With Monopoly Electronic Banking, all it takes is a card swipe for millions to change hands.

Now you can collect rent, buy properties and pay fines the fast and easy way! 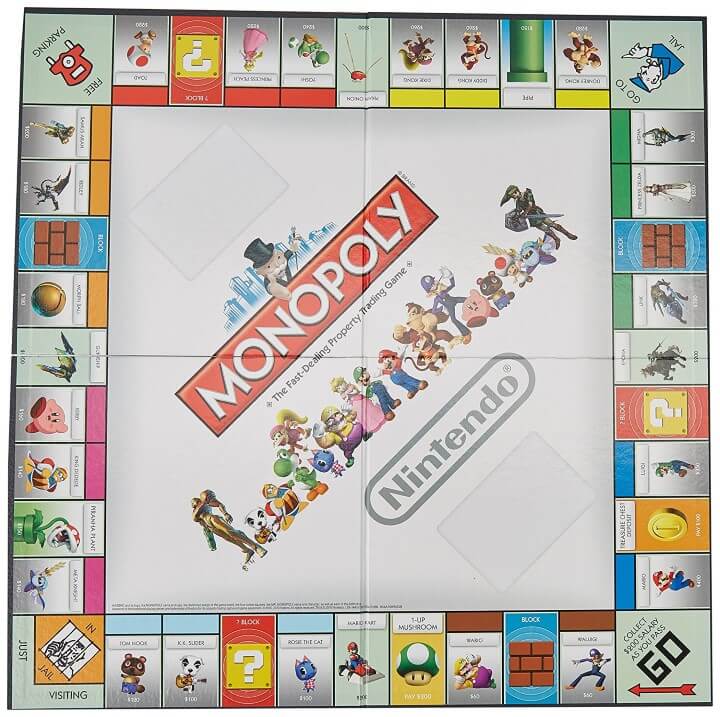 Description: No controllers are necessary as you join forces with Mario, Luigi, Link, Zelda, Kirby and your other favorite characters on a quest to defeat your opponents and own it all. 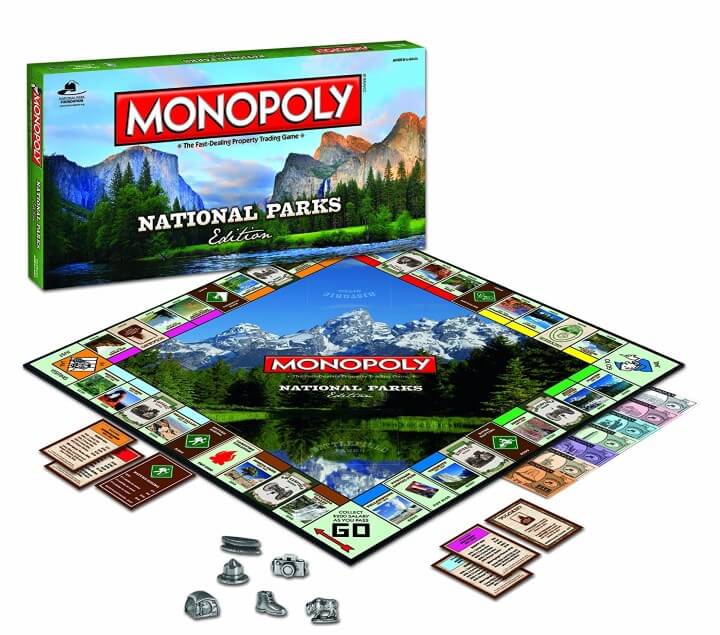 Description: The game you remember from childhood now offers a new adventure for the outdoor enthusiast. Featuring 60 National Parks, as well as various animals, this Monopoly version sticks with the traditional rules to take you on a cross-country trip through some of the United States’ most scenic locations. 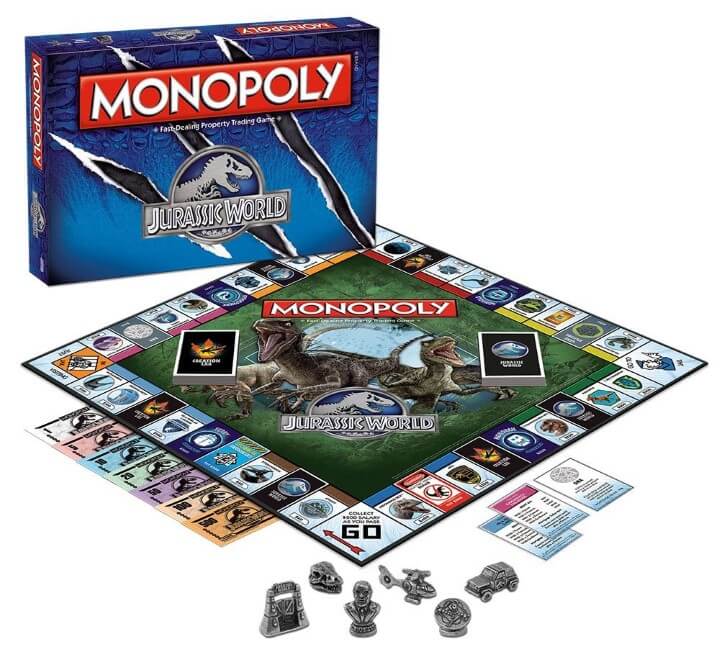 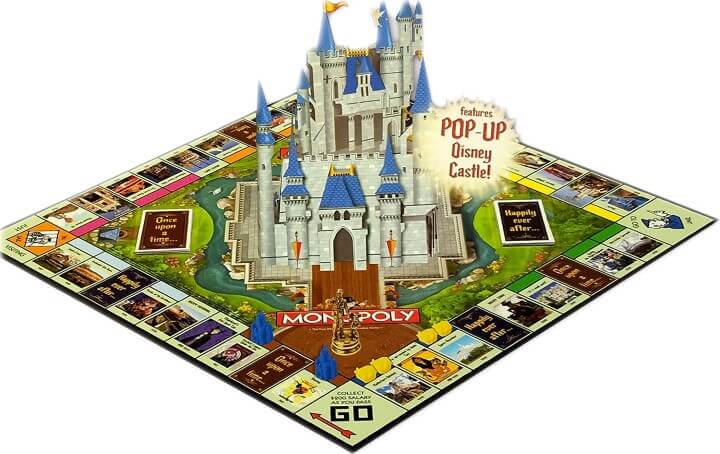 Description: Disney Theme Park Edition III Monopoly Game lets you relive the excitement of all your favorite attractions at Disney Theme Parks – from The Haunted Mansion attraction to the Disney Monorail – with this very special edition of the classic Monopoly board game.

Magic Mirror and Sorcerers Hat cards might make your dreams come true, or they might bring an unexpected trip to jail. Use your Wishes wisely to collect the deeds to Disney Theme Park attractions; increase their value by adding Mickey’s Toontown houses and Disney castles on your way to victory. 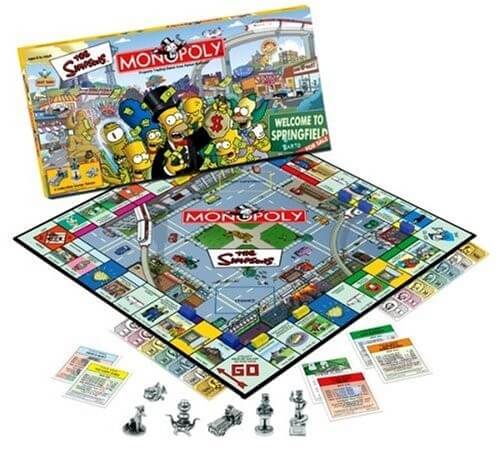 Buy: Click Here To Buy The Simpsons Edition On Amazon 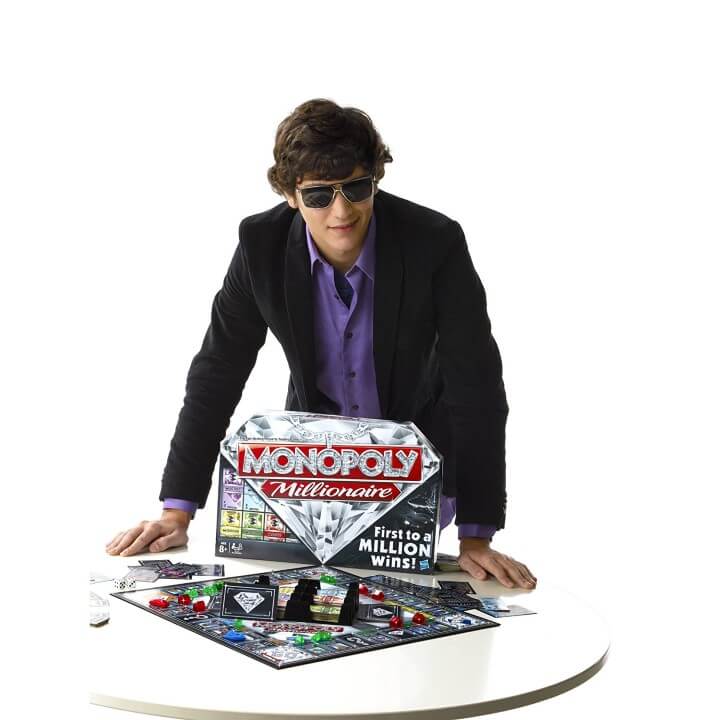 Description: It’s a brand new way to play the classic property trading game! Be the first to make a million dollars and win Monopoly Millionaire.

Fortune, Chance and Millionaire Lifestyle cards change your fortunes, while you collect your salary, buy sets of properties, and build houses and hotels to charge higher rent, just like in the classic game. 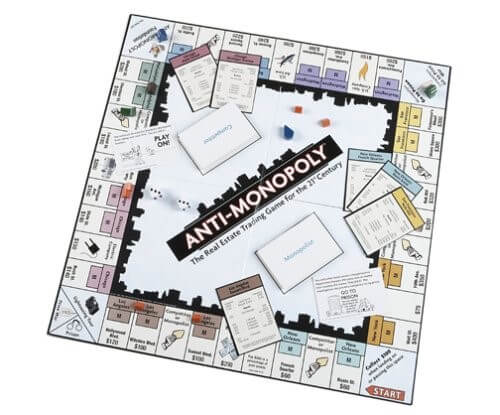 Description: Anti-Monopoly Board Game, by University Games, is The Real Estate Trading Game for the 21st Century. This game is an update of the “monopoly” folk game invented 100 years ago by Elizabeth Magie.

Competitors charge fair rent, create supply and demand and can end a price war. Monopolists are greedy, charge high rents, restrict supply, but can go to prison for price fixing.

The players follow different rules, depending on their status, in their quest for big money and real estate.