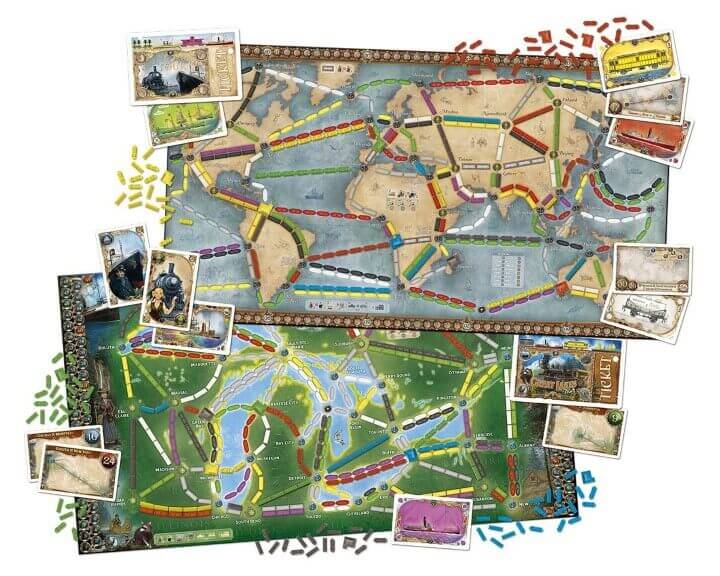 Ticket to Ride is the ultimate game for people who love trains and board games.

However, did you know that there more than a dozen versions and expansions of the game available to play?

Below we rank 14 of them from best to worst based on scores from BoardGameGeek.com.

Just be aware that we list both stand-alone games and expansion packs below. Obviously, expansions packs require a full version of the game to play, so be sure to double check before you buy. 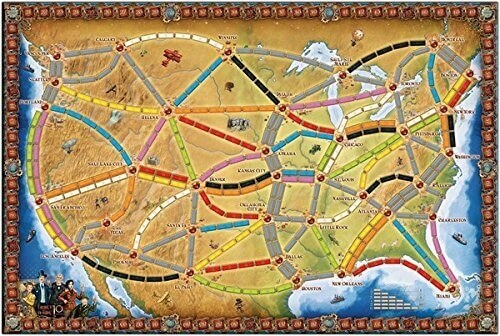 It includes a giant US board map that is 50% larger than the original. It still uses the classic US routes, but with new illustrations and design.

There are 5 sets of finely sculpted custom plastic trains, each featuring a different type of train car and unique paint scheme reminiscent of toy trains of yesteryear.

These are nestled in 5 tin train storage boxes, each with their own custom logo and artwork matching the trains’ rail line. Added to the mix are 110 large format Train cards and 69 Destination Tickets (the original US map tickets, PLUS those from the 1910 expansion) and a new multi-lingual rules book in 12 languages.

This special 10th Anniversary Edition is a “must-have” for Ticket to Ride fans.

The game play remains faithful to the original classic US map version – but the new design, illustrations, oversized map and especially the new custom trains and tin storage boxes – take the Ticket to Ride experience to a whole new level. 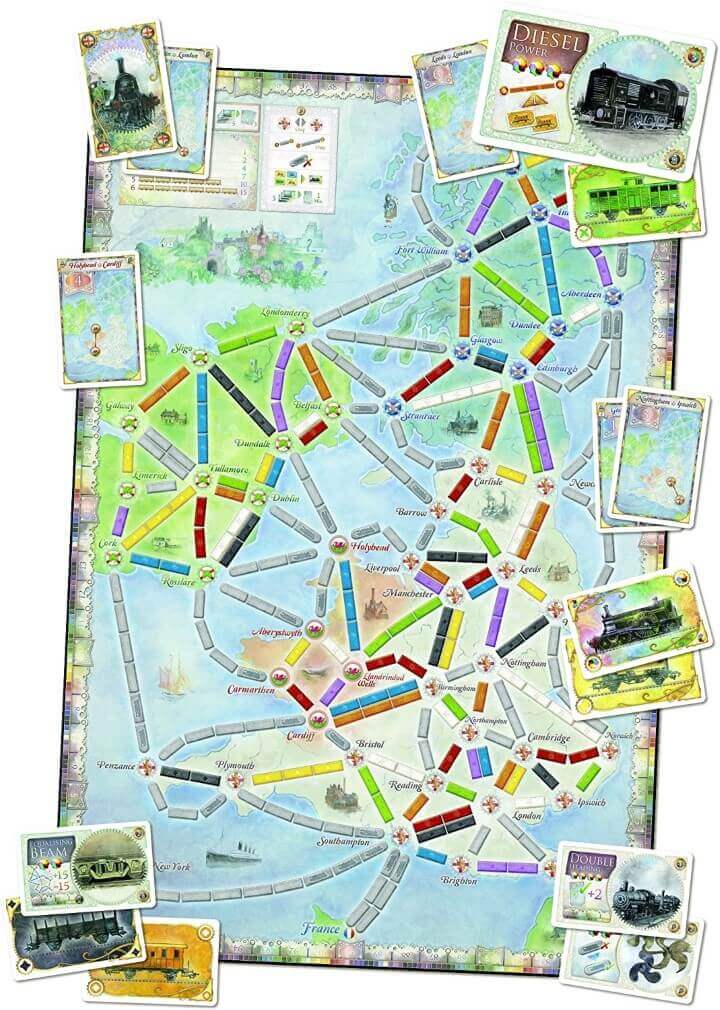 One side will show a map of the United Kingdom, including Great Britain and Ireland, set in the 19th Century, at the dawn of the railroad revolution.

To play on this map, a completely new set of train cards are also included. A unique feature of this scenario is the introduction of Technology cards that allow players to improve the quality and sophistication of their trains during the game, allowing faster runs and longer routes.

Players must use Locomotive cards to purchase the Technology cards, forcing them to decide between technological development or expanding their route network on the map.

This scenario supports 2 to 4 players.

The other side of the game board shows a map of Pennsylvania.

Playing this scenario uses a deck of Stock Shares, representing actual historical railroads that operated in the region shown on the map.

When a player completes a route on the map, they have the opportunity to “invest” in a company through the use of the Stock Shares, with control of each company awarding bonus points at the end of the game.

This scenario supports 2 to 5 players. 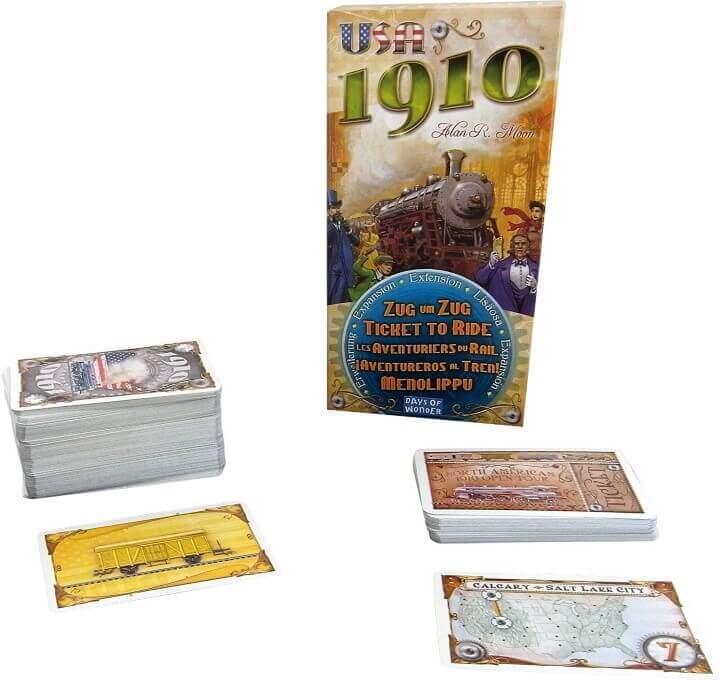 Game Description: Ticket to Ride – USA 1910 is an expansion that will keep you playing well into the next decade!

It is sure to bring your family and friends hundreds of hours of further enjoyment, riding the rails across a new America.

Buy: Click Here To Buy The USA 1910 Expansion On Amazon 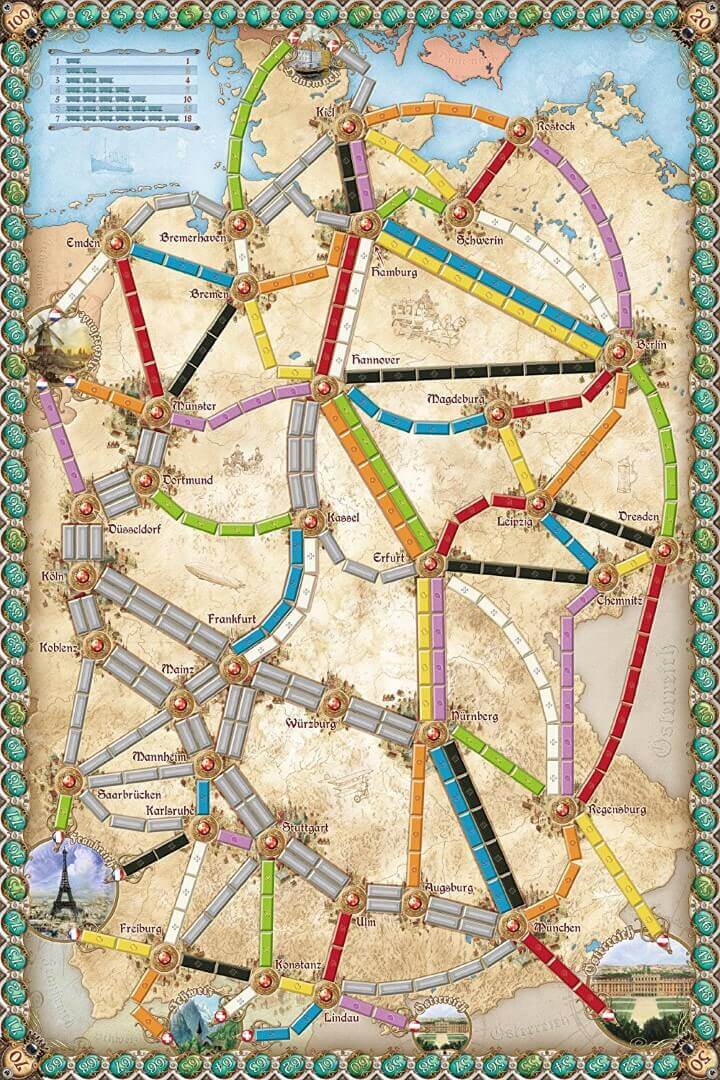 Game Description: A complete stand-alone version of Ticket to Ride set-in Germany. Note all cards and rules are German, although they are similar to US version. Therefore, only recommended for those already familiar with how to play Ticket To Ride. 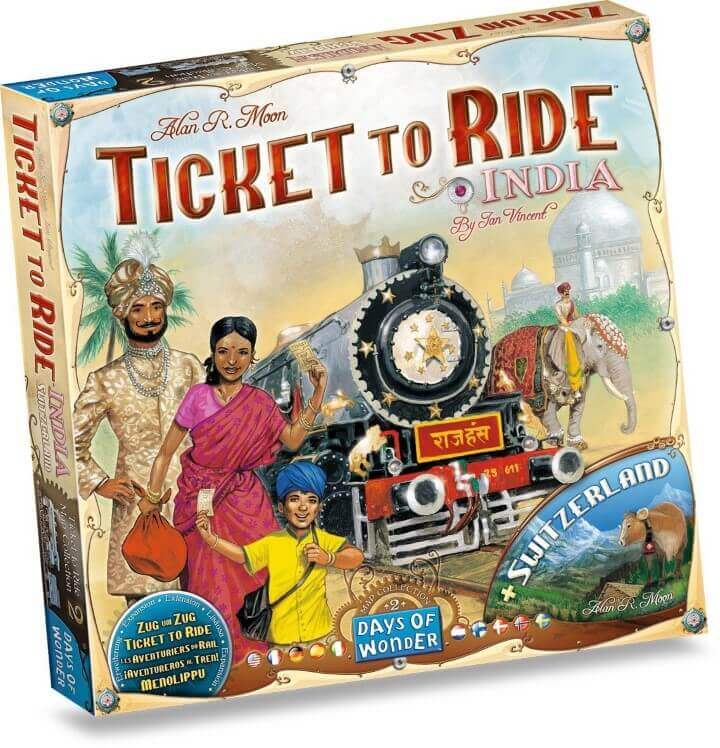 Game Description: Embark on a tour of one of the most densely populated and colorful countries of the world with Ticket to Ride India & Switzerland in Volume 2 of the Ticket to Ride Map Collection.

The year is 1911, and the world is changing fast in the British Raj. Will you complete your Grand Tour in time, or lose to more cunning – or simply better connected – opponents?

Discover Switzerland’s challenging geography with its verdant valleys and mountain passes, as well as the charm of its neighbouring countries.

Ticket to Ride India – Map Collection Volume 2 includes a double-sided board map of India, backed with Switzerland, plus Destination Tickets and Rules booklet for each map. 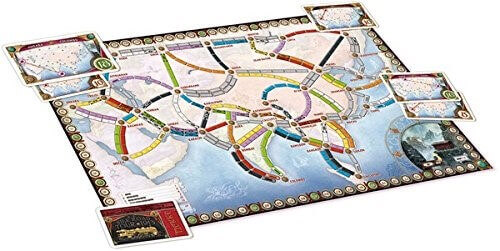 Game Description: Specifically designed for up to 6 players, you and a partner will team up against other groups on a 25,000 km wild ride from Kabul to Beijing, through the steppes of Mongolia and the Gobi desert up to the Yellow River.

Or, if you prefer the quiet pleasures of traveling alone along the Silk Road, or winding your way through the hustle and bustle of Indochina, venture into Legendary Asia.

Just be ready for a hair-raising ride through the Mountain passes of the Himalayas. 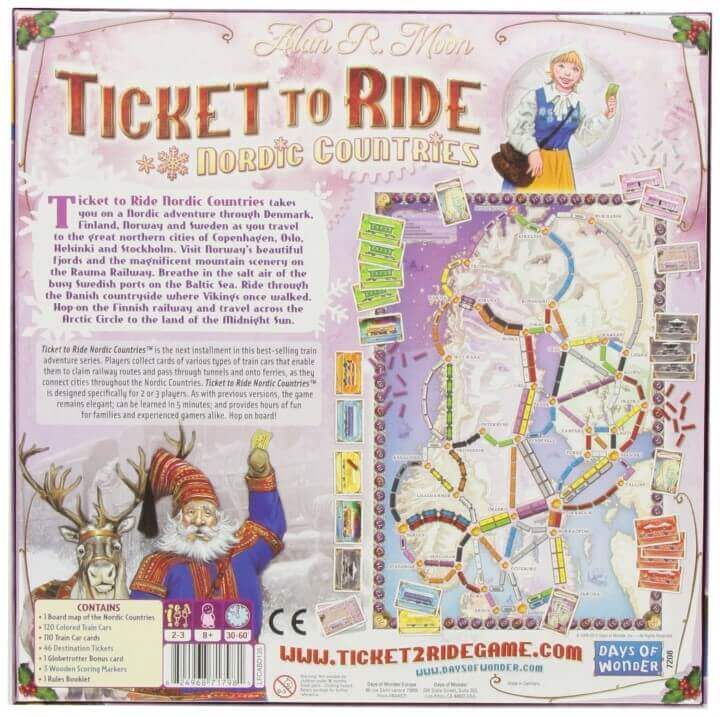 Game Description: Ticket to Ride Nordic countries takes you on a Nordic adventure through Denmark, Finland, Norway and Sweden as you travel to the great northern cities of Copenhagen, Oslo, Helsinki and Stockholm.

Visit Norway’s beautiful fjords and the magnificent mountain scenery on the trauma railway. Breathe in the salt air of the busy Swedish ports on the Baltic Sea.

Ride through the Danish countryside where Vikings once walked. Hop-on the Finnish railway and travel across the Arctic Circle to the land of the midnight sun.

Players collect cards of various types of train cars that enable them to claim railway routes and pass through tunnels and onto ferries, as they connect cities throughout the Nordic countries.

As with previous versions, the game remains elegant, can be learned in 5 minutes and provides hours of fun for families and experienced gamers alike.

Ticket to ride Nordic countries is a complete board game designed specifically for 2 or 3 players. 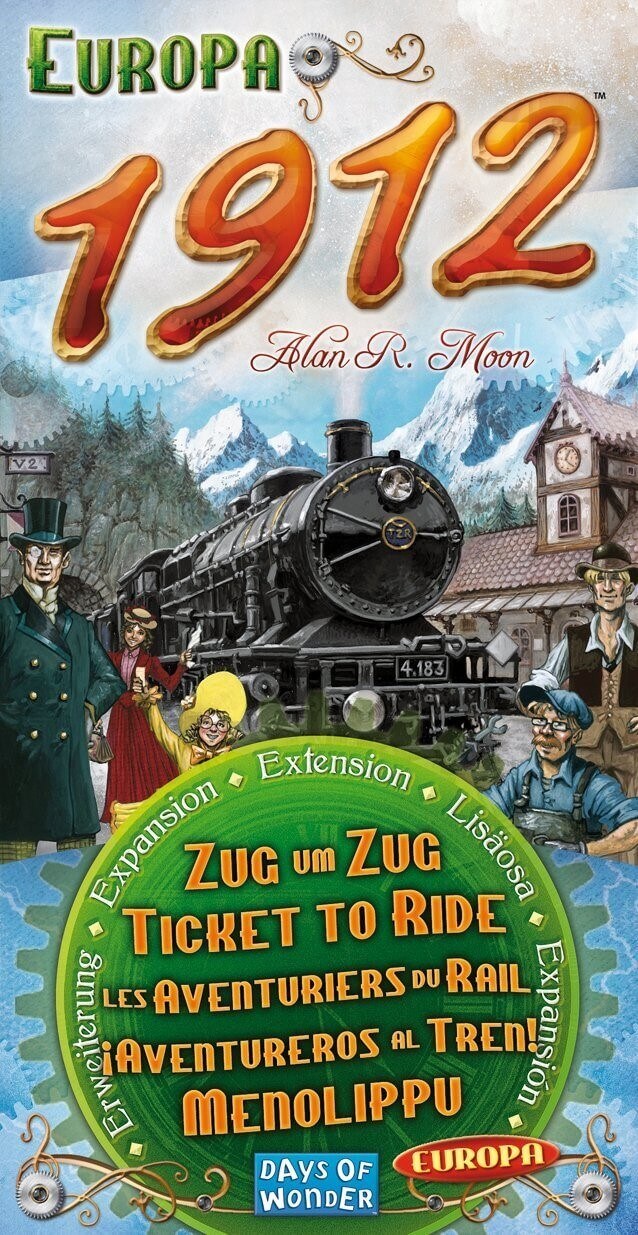 This expansion also introduces Warehouses and Depots, new game rules and pieces that create an additional strategic layer and can be played with any of the Ticket to Ride maps.

Wooden Train Depots are placed on cities selected by each player. Throughout the game, each player’s Warehouse will accumulate Train cards and those who have the foresight, clever timing, or just plain good fortune to build a route to a Depot can make off with a fistful of Train cards.

Depot placement and skillful Warehouse tactics become a key part of a winning Ticket to Ride strategy. An original copy of any complete game in the Ticket to Ride series is required to play with Warehouses and Depots.

New Destination Tickets are for use only with Ticket to Ride Europe.

Buy: Click Here To Buy The Europa 1912 Expansion On Amazon 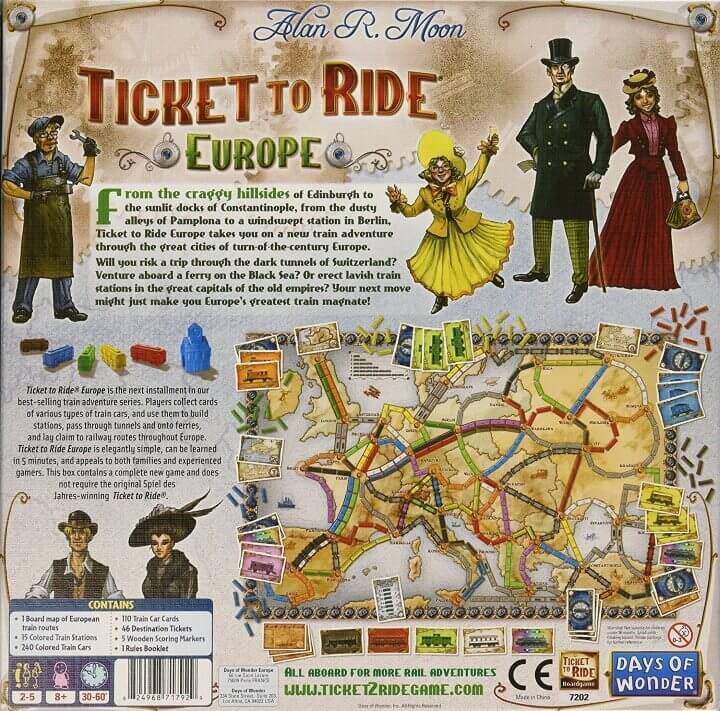 Game Description: Get ready for a new train adventure as you travel across Europe with Ticket to Ride – Europe, the new edition of the worldwide hit from Days of Wonder.

From Edinburgh to Constantinople and from Lisbon to Moscow, the game will take you on a ride to the great cities of turn-of-the-century Europe.

Plus, we’ve upgraded you to First-Class accommodations with larger cards, new Train Station game pieces, and a lavishly illustrated gameboard.

Like the original, the game remains elegantly simple, can be learned in three minutes, and appeals to both families and experienced gamers.

Ticket to Ride – Europe is a complete, new game and does not require the original version. It is for 2 to 5 players, and it takes 30-60 minutes to play. 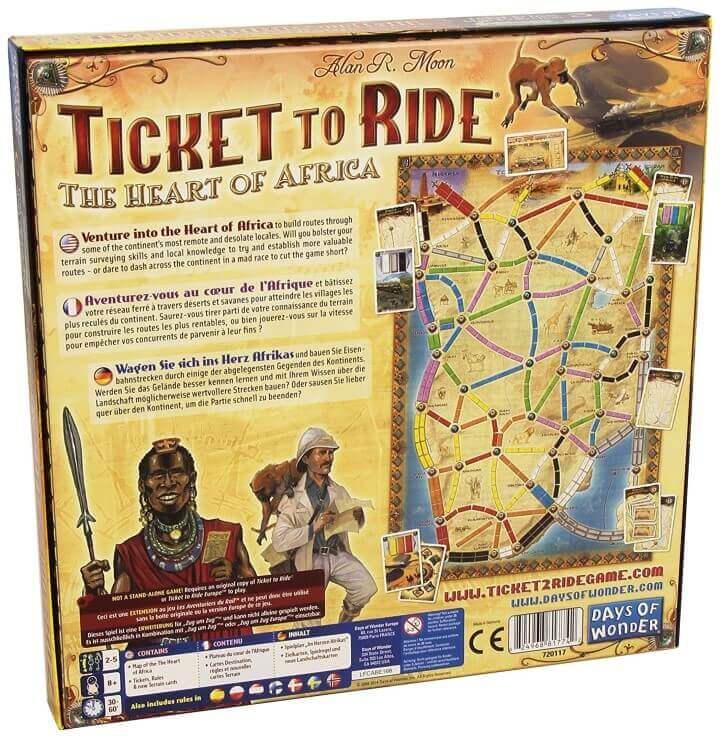 Game Description: Set in the vast wilderness of Africa at the height of its exploration by intrepid explorers, missionaries and adventurers, this new single-sided board map focuses on the central and southern heart of the continent displayed in a vertical format.

Each Terrain Type is associated with different Route colors:

Players can draw Terrain cards just like Train cards and they may use these to double the value of the routes they claim. Designed for 2-5 players. 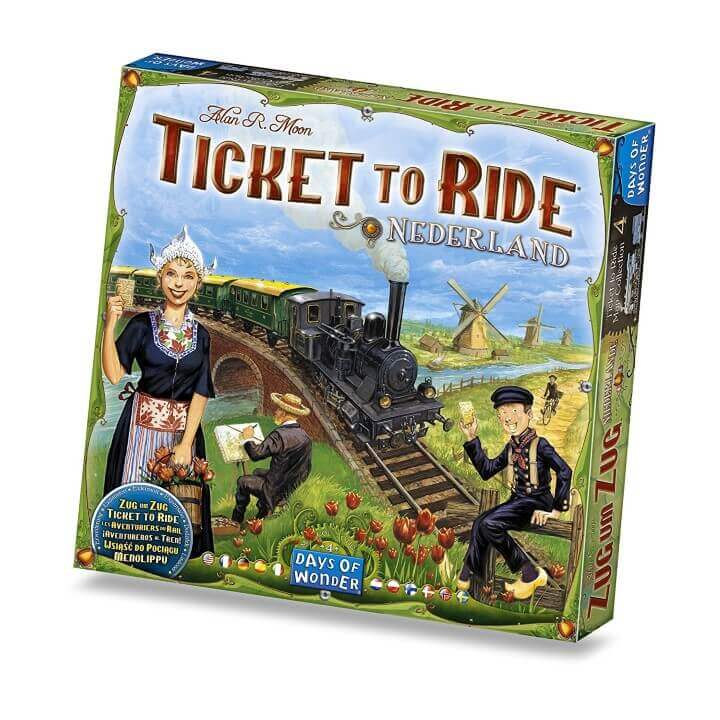 Game Description: Ticket to Ride Nederland is the fourth in the series of Ticket to Ride Map Collection expansions and is set in The Netherlands low-country with hundreds of canals and rivers and just as many bridges that cross them.

Players score bonus points based on the total value of Bridge Toll Tokens they still own at game’s end. 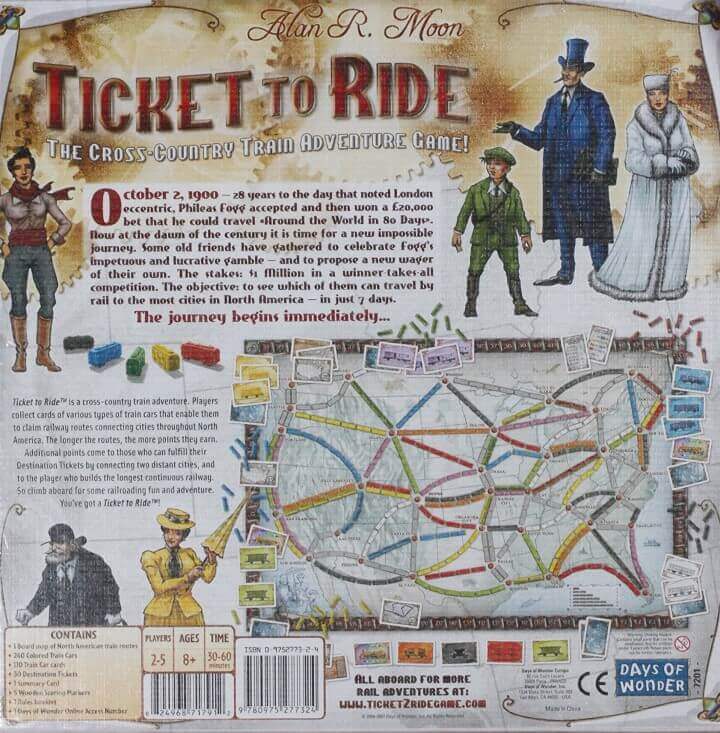 Game Description: Ticket to Ride is a cross-country train adventure game. Players collect train cards that enable them to claim railway routes connecting cities throughout North America. The longer the routes, the more points they earn.

Additional points come to those who can fulfill their Destination Tickets by connecting two distant cities, and to the player who builds the longest continuous railway.

Buy: Click here To Buy Ticket To Ride On Amazon

Players collect cards of various types (trains and ships) that enable them to claim railway and sea routes on a nicely illustrated double-sided board, featuring the world map on one side and the great lakes of North America on the other.

Elegantly simple and fast to learn, it takes the ticket to ride series to the next level! Veteran railroaders as well as family and friends will be delighted to set sail to the new horizons of ticket to ride rails and sails. 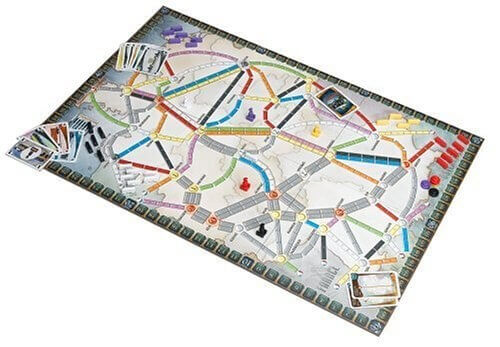 Players collect sets of train cards that enable them to claim railway routes and fulfil their all-important Destination Tickets by connecting distant cities across a map of Germany.

The Märklin Edition also introduces a new Ticket to Ride game play element – passengers that are used to pick up valuable merchandise along the routes.

Created in partnership with Märklin, the world leader in model railroading, this edition features – 118 historical train photographs, each carefully selected from the incomparable Märklin archives.

Ticket to Ride – Marklin is a complete, stand-alone game and does not require the original version.

Enjoy this article? Please help us by sharing it with other Ticket to Ride fans: