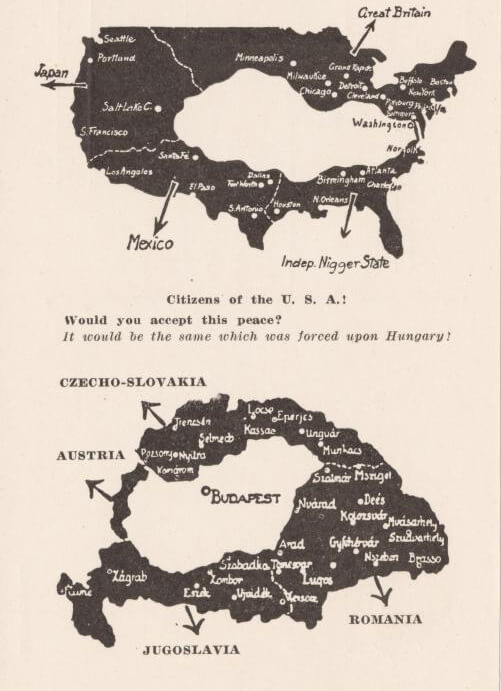 The map above was distributed by the Hungarian Government to foreign locals protesting about the “unfairness” of the Treaty of Trianon in 1920.

The Kingdom of Hungary was one of the successor states of the Austro-Hungarian Empire which collapsed following its defeat in the First World War.

The treaty was controversial in Hungary, because the New Kingdom only covered 28% of the land area and had 36% of the population of the pre-war Kingdom of Hungary (the Hungarian half of Austria-Hungary). It also left 3.3 million Hungarians outside of the new smaller Kingdom.

The map above is an attempt to show what this would translate to if the same thing happened to the United States. That said the map is very much a product of its time in terms of language use and reflects the very racist attitudes that existed at the time.

Interestingly, despite everything that happened between 1920 and today, Hungary’s borders are almost exactly the same today as those set-up in the Treaty.

Find this map interesting? Then please help by sharing it: