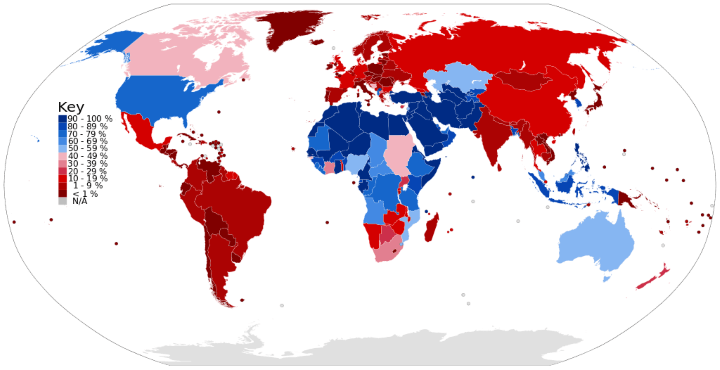 Map created by AHC300 via Wikimedia

The map above shows Male circumcision prevalence by country, according to sources from the Circumcision Reference and Commentary Service. It shows what percentage of males (of all ages) have been circumcised.

The World Health Organization estimates that roughly 30% of males worldwide have been circumcised, 2/3rds of whom are Muslim.

This can be seen very clearly in the map above, where Muslim majority countries are all in Dark Blue (prevalence above 90%). According to the data set used for the map, Afghanistan has the highest prevalence of male circumcision at 99.7%. At the other end of spectrum there are 40 countries with estimated prevalence below 0.1%.

The practice is relatively rare outside of Jewish and Muslim populations throughout Europe, India, East Asia, and South America.

Yet, the United States is an interesting outlier. Despite being roughly only 1.8% Jewish and 0.8% Muslim, it’s estimated to have a 79% male circumcision prevalence rate. Making it much more similar to to the countries of the Middle East than other countries in the “West.” Perhaps more interesting still, is that while there are many theories as to why this is the case, there is no definitive explanation.

Other interesting outliers include South Korea (83.2%) vs North Korea (0.1%) and the Philippines (92.5%). Despite neither being Muslim majority countries they both have very high prevalence rates. In both cases, it’s suspected to have been something introduced by US servicemen stationed in each country after World War Two.

Have an opinion on male circumcision? Please leave your comments below (but do keep it civil):