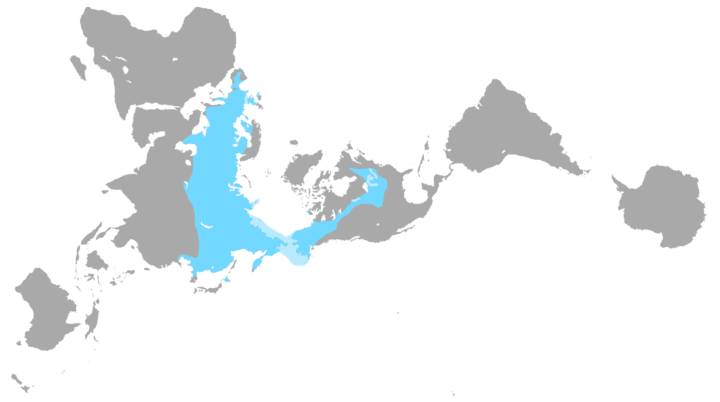 Map created by Azcolvin429 via Wikimedia

The map above shows the range of Woolly Mammoths at their peak in the Late Pleistocene era which ended roughly 11,700 years ago.

The map is a Dymaxion projection with the blue regions showing where they roamed (note light blue regions were land during this period).

You can see a more standard map projection below:

Map of the Distribution of woolly mammoths by DagdaMor via Wikimedia

In case there’s any confusion, the light green areas of the map refer to areas where they may have roamed, the dark green bits are where they are not believed to have roamed and the light blue areas are ice-sheets the mammoths could have used to roam across continents.

Therefore as you can see they roamed as far as England down to Spain, across most of Europe and Russia to Hokkaido, Japan and then across the Bering strait and into Alaska and then down to the Midwestern United States and Great Lakes region.

The reason they did not live in not live in what is today Northern Canada is because the area was covered in a massive ice sheet.

The area where they lived was known as the Mammoth steppe. If you’d like to learn more about woolly mammoths, you might find the following books interesting:

Have any thoughts about Mammoths? leave them below: