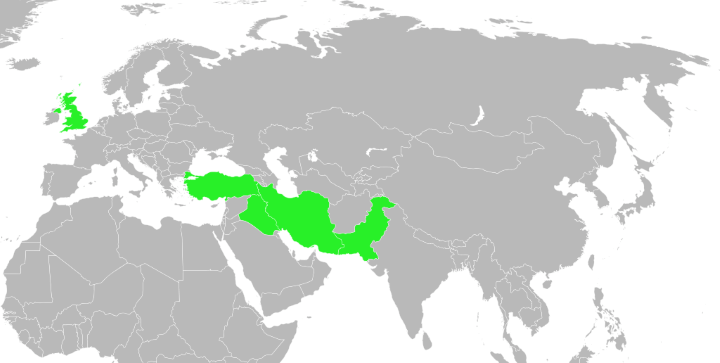 The Central Treaty Organization (CENTO), also known as the Baghdad Pact or the Middle East Treaty Organization (METO), was one of Cold War’s weirdest and ultimately least successful alliances. This was largely the result of the improbable quintet of nations making up the Organization: Iran, Iraq, Pakistan, Turkey, and the United Kingdom.

Yet an alliance made up of these unlikely allies is not the only interesting thing to note about CENTO.

Perhaps most surprising of all, given its current relations with many of the former member states, was that the United States was integral in setting-up the alliance in 1955. Yet was itself unable to become a member.

Reasons for why it couldn’t join include everything from, “for purely technical reasons of budgeting procedures.” to John Foster Dulles’ claim that it came down to “the pro-Israel lobby and the difficulty of obtaining Congressional Approval.”

In any case, the Organization spent its entire limited existence without the formal membership of the United States, but was nevertheless highly influenced by them.

CENTRO’s purpose was similar to that of the much better known (and far more successful) North Atlantic Treaty Organization (NATO), mainly to contain the Soviet Union and prevent its expansion into the Middle East.

Treaty members had to agree to mutual cooperation and protection. But, perhaps most interestingly, given the current political situation many of these countries find themselves in, they also had to agree not to interfere in each other’s internal affairs.

As the group’s original name, the Baghdad Pact, suggests its first headquarters (HQ) were in Baghdad, Iraq. However, an Iraqi military coup in 1958 resulted in Iraq’s withdrawal from the group, which in turn resulted in a name change to CENTO and a HQ shift to Ankara, Turkey.

It also did not intervene in the Indo-Pakistani Wars of 1965 or 1971, claiming that it was an anti-Soviet pact, not an anti-India one.

CENTO was finally disbanded in 1979 after it was unable to prevent the Turkish invasion of Cyprus in 1974 or the Iranian Islamic revolution.

One the few legacies from the Organization is a railway line. Originally, it was meant to connect London to Tehran via Van, Turkey. Ultimately, only a 215 mile (346 km) portion was completed, connecting Lake Van, Turkey to Sharafkhaneh, Iran and included a 4 hour rail ferry.

One final surprising element of the Organization was that it also established the CENTO Institute of Nuclear & Applied Science. It was located first in Baghdad and then moved to Tehran in 1958. Finally closing down with the organization itself in 1979.

Given that it lasted just 24 years, failed to prevent Soviet influence in many parts of the Middle East (e.g. Egypt and Syria), failed to prevent or intervene in wars or revolutions involving member states, and who’s main lasting legacy is a rail line, I think it’s fair to argue that CENTO was among the least successful Cold War alliances.

You can learn more about CENTO from the following books: