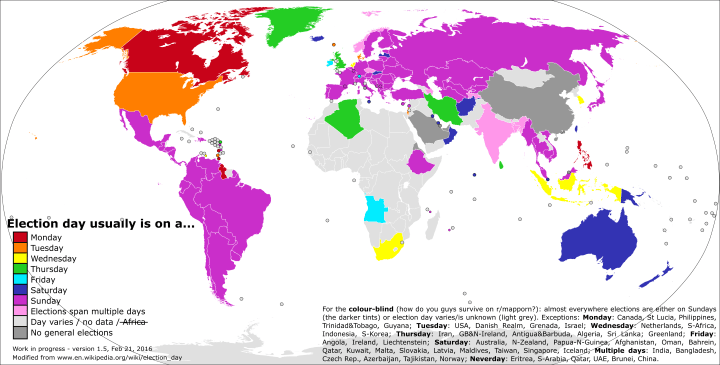 The map above shows what day of the week elections are normally held, but doesn’t say anything about whether the elections are free and/or fair.

Sunday is far and away the most common election day around the world. Yet, is unpopular among English speaking democracies.

Canadians like elections on Mondays, Americans prefer holding theirs on Tuesdays, South Africans choose Wednesdays, The UK goes for Thursdays, Ireland opts for Fridays, Australia and New Zealand have decided on Saturdays and India can’t pick just one day of the week, so tends to have multi-day voting.

Now keep in mind just because a country normally holds an election on a given day of the week, does not necessarily mean they are constitutionally bound to do so. Many of the days of the week chosen have more to do with history or convention than any concrete modern reason.

Nevertheless, the users on reddit, where this map was first published, had their own theories about why countries choose to hold elections on the day of the week they do.

For the UK, user GingerPrinceHarry says that:

Most UK elections/referendums have been on a Thursday, going back decades.

The supposed reason for this is that most people got paid on a Friday, and so by having the election on the Thursday people had the least amount of money, were less likely to be out at the pub, and so were more likely to be able to vote.

Btw, I guess that South-Africa and Indonesia having elections on Wednesdays is [EDIT: not necessarily] a clear piece of colonial heritage from their Dutch time.

In calvinist-protestant the Netherlands, elections on Sundays were out of question, and since elections used to require a full day of travel for some, they couldn’t be held on Saturdays and Mondays either. But why it is specifically on a Wednesday…?

With user PrinceChocomel responding that:

On Ireland user Saoi_ states that:

When Ireland has mid week election days they are usually seen as blatantly anti-“the student vote” (or just young people in general) who are most often living away from their constituency; and postal voting is next to impossible here (unless you are working for the state).

And finally for the US, user RsonW says that:

The reason for Tuesday (specifically the Tuesday following the first Monday) being the election day in America is that is when farmers would traditionally bring their goods to town; meaning it’s when the most people would’ve been close to polling places.

If you want to learn more about elections around the world, have a look at the following books: