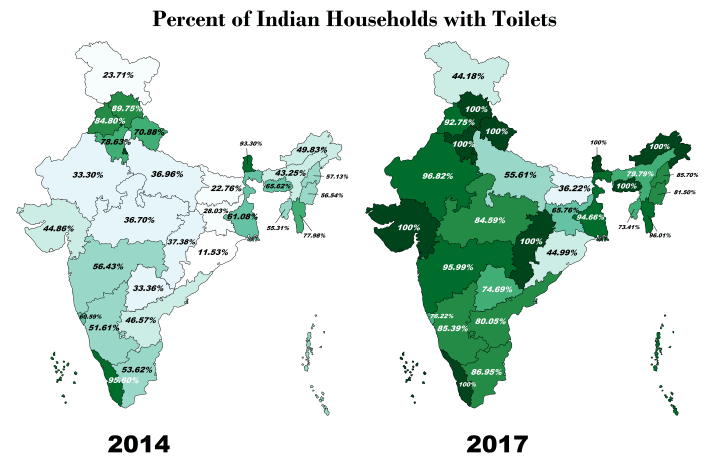 The map above shows the theoretical change in the percentage of Indian Households with their own toilets between 2014 and 2017.

One of the key objectives of the Mission is to eliminate open defecation by launching an educational and promotional campaign, constructing household-owned and community-owned toilets and establishing a mechanism to monitor their use.

The aim is to achieve an open-defecation free India by October 2, 2019, the 150th anniversary of the birth of Mahatma Gandhi.

The core target of the rural program is the construction of 111.1 million toilets at a projected cost of US$30 billion. The Mission has a workforce of around 3 million, including government employees and school and college students from all parts of India.

The primary task of constructing toilets is done either by the individuals with funding help from the government or, in some cases (mostly for public toilets), by the government itself.

According to the Ministry of Housing and Urban Affairs, as of the end of 2017, the urban component has seen the construction of over 4 million individual toilets and 234,000 community and public toilets and has declared 1,678 cities to be free of open defecation. (For the latest data on the urban program can be seen here.

As for the rural program, the Ministry of Drinking Water and Sanitation claims that by the end of 2017 around 59 million toilets had been constructed since the start of the program. According to government data by November 2017 the country’s sanitation coverage had increased from 39% to 65%. (The latest data on the rural program, can be seen here.)

However, as of January 2018 there had been no independent verification of the numbers, which had caused the World Bank to delay the release of a $1.5 billion loan for the rural program.

According to the media, some of the reported results may have been overstated. For example, a recent posting by the Business Standard provided an analysis of budgetary allocations that suggested that some states may have inflated the number of toilets constructed under the program.

It also noted that the Auditor General of India had found such over-reporting under a previous program. According to the posting some big states such as Uttar Pradesh and Bihar have made little progress and others are not spending money on information, education and communication activities to motivate rural households to use toilets

This last point highlights the fact that the challenge is not only one of constructing enough toilets, but also one of overcoming cultural barriers to their use.

Although much still needs to be done and significant challenges remain, nevertheless it appears that considerable progress has been made in many parts of India in addressing this serious public health issue.

You can learn more about the important issue of sanitation from the following books:

Find this post interesting? Please help us by sharing with a friend: