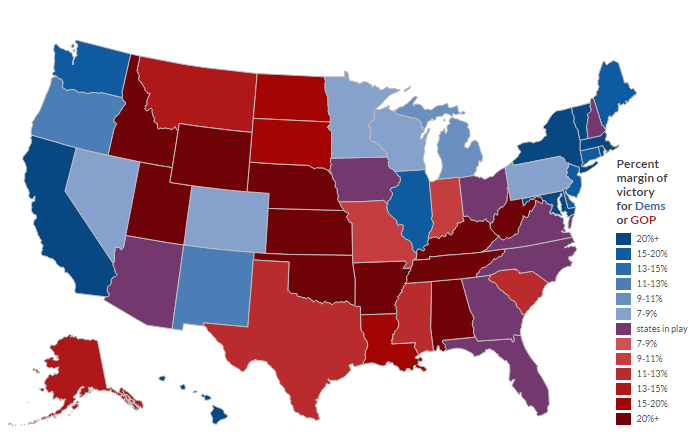 Map created by Partnership for a New American Economy, click for interactive version.

The map above shows what the 2016 presidential election results could look like based on the increase in the number of Hispanic and Asian voters who will be voting for the first time 2016.

The interactive version allows you to make some assumptions and see what the results would be. Some interesting findings include:

Assuming medium voter turnout and that Hispanics and Asians both vote for Democrats and Republicans in the same proportion that they did in 2012 (74% vs 26%) the Democrats would win the key swing states of Colorado, Florida, Iowa, Michigan, Minnesota, Nevada, New Hampshire, New Mexico, Ohio, Pennsylvania, Virginia and Wisconsin and the Republican would win the swing states of Arizona, Georgia, Indiana, Missouri, North Carolina and Texas.

If the number is raised to 44% support for the Republicans (what George W. Bush received in 2004) then Florida would become too close too call, while still leaning Democrat.

If voter turnout is high and Hispanics were to vote 50/50, then Florida would still be too close to call but would lean Republican.

You can also test out assumptions about what would happen in 2020. In total 16 states (Arizona, California, Colorado, Florida, Georgia, Hawaii, Illinois, North Carolina, New Jersey, New Mexico, Nevada, Ohio, Oregon, Pennsylvania, Texas, and Virginia) will have more new Hispanic and Asian voters in 2020 than decided the race in 2012.

Thus, the GOP has its work cut out if they want any hope of winning in 2016, let alone 2020. However, the Democrats should not become complacent since the Republican party has many Latino politicians including Presidential nominee contenders Marco Rubio and Ted Cruz.

If you’d like to learn more about these issues we recommend the following books:

How do you think the 2016 electoral map will look on the morning of November 9th, 2016? Leave your thoughts below: