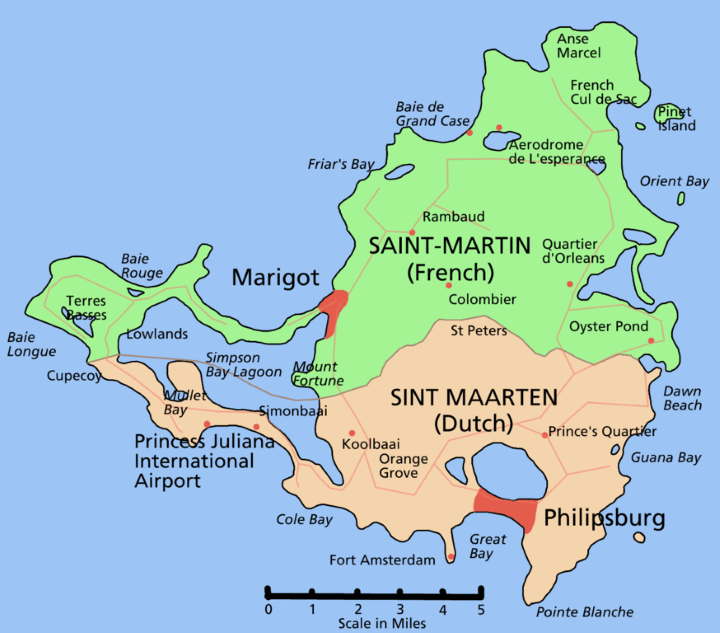 Saint Martin (French: Saint-Martin; Dutch: Sint Maarten) is one of the Renaissance Islands (along with Anguilla and Saint Barthélemy) situated at the northern end of the Leeward Island chain in the northeast Caribbean.

Fact: With an area of only 87 square kilometres (34 square miles), it has the distinction of being the smallest inhabited island that is divided between two nations.

The northern portion, Saint-Martin, which occupies about 60% of the island, is an overseas collectivity (collectivité d’outre-mer or COM) of France.

COMs are administrative divisions of France as defined under reforms to the French constitution that were enacted in 2003.

Saint-Martin became a COM with its own Territorial Council in 2007 when both it and Saint Barthélemy were separated from the overseas department of Guadeloupe.

At present there are four other COMs: French Polynesia; Saint Barthélemy; Saint Pierre and Miquelon; and Wallis and Futuna.

The Southern portion, Sint Maarten, which occupies the remaining 40% of the island, is one of four countries that form the Kingdom of the Netherlands. The other three countries are the Netherlands itself, Aruba and Curaçao.

Fact: Saint Martin includes the only land border shared by the Netherlands and France anywhere on Earth.

The island was first settled by Arawak Indians who arrived from South America around 800 BCE. They were later followed by the Island Caribs (Kalinago) who gave the island the name Sualouiga, or Land of Salt.

On November 11, 1493 it was claimed for Spain by Christopher Columbus on his 2nd voyage who named it Isla de San Martín, since the date coincided with the feast day of Saint Martin of Tours.

It is likely that Columbus never actually visited the island. He may just have sighted it, recorded its existence and sailed on.

During the 17th Century there was intermittent rivalry between the Dutch and French for control of the island and its salt mines. In 1648 the two countries signed the Treaty of Concordia which divided the island in two and urged its people to live in a cooperative manner.

The locals have a delightful folktale as to how the 1648 boundary was established:

Each side was asked to choose a walker. The two walkers were then placed back-to-back at one side of the island and were then asked to walk, not run, in opposite directions while sticking to the shore.

They met up again on the far side of the island and the line between the start and finishing points became the frontier. It turns out that the French walker had covered more ground than his Dutch counterpart. Each side had a different explanation for this.

The French put it down to the choice of stimulant before the race. The French walker had chosen wine, while the Dutch walker had imbibed the much stronger Jenever (Dutch gin), which had the effect of slowing him down.

The Dutch, on the other hand, suspected the French walker of running.

In any event this did not really settle the matter. Both the boundary and the island as a whole, continued to be in dispute for many years.

At various times Saint Martin was entirely occupied by the French, by the Dutch and even by the British.

It was not until 1816, following the signing of the Second Treaty of Paris, that the Dutch and French came to a final agreement on the dividing line.

Today the main industry of the island is tourism, with around one million visitors annually.

In 2000 about 85% of the workforce was engaged in the tourist industry.

When it comes to tourism, the two sides are quite different. The French side is noted for its luxury resorts, secluded beaches, shopping and superb cuisine.

The Dutch side, with its busy cruise port and lively commercial district, is both more developed and more informal.

It is known for its casinos, exotic drinks, jewelry and nightlife.

Fact: In 2014, according to the Gaming Technologies Association, Sint Maarten had one gaming machine for every 14 residents: the highest number per capita of any country in the world.

To compare hotels for your visit use one of the following links:

And if you do decide to visit, you may want one of the following guide books:

If you enjoyed this map and write-up please help us by sharing it: