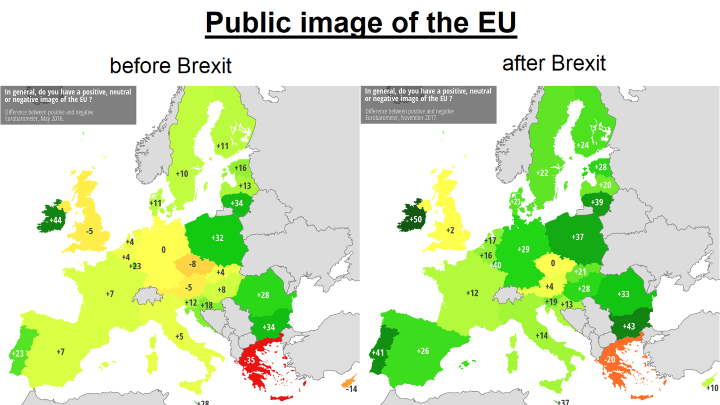 The map above shows how each European Union (EU) country views the EU as a whole based on polls conducted by Eurobarometer in May 2016 vs November 2017.

It shows the net difference between the positive and negative scores based on the following question:

In general, does the EU conjure up for you a very positive, fairly positive, neutral, fairly negative or very negative image.

Overall, here’s how the numbers play out buy country:

The 5 countries with the biggest increase in positive image are: Germany, Cyprus, Belgium, Spain and Portugal.

Although, most interestingly the UK has had a similar, smaller shift in sentiment. Going form -5 to +2 during that time. This in theory means slightly more people in the UK have a positive image of the EU compared to a negative one (35% positive vs 33% negative).

That said, it still has the 3rd lowest score after only Greece and the Czech Republic.

All countries, with the exception of Croatia, shifted to a more positive view of the EU. And even then, Croatia still has a +13 rating.

The 5 most pro-EU counties are currently: Ireland, Bulgaria, Portugal, Luxembourg and Lithuania.

What do you think about this map? Please leave your comments below and help us by sharing it: