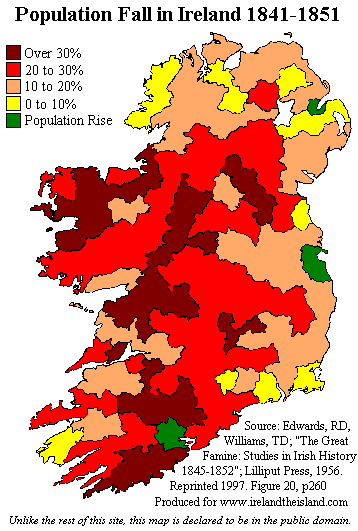 The decline was mostly as a result of The Great Famine, also known as The Great Hunger, which started in 1845 and swept the country for several years. During the famine, approximately a million people died and a million more emigrated from Ireland, causing the island’s population to fall by around 20%.

The immediate cause of the famine was an infestation of Phytophthora infestans, a potato disease commonly known as potato blight.

Its impact was particularly devastating because much of the rural Irish Catholic population of tenant farmers had been driven onto ever smaller units of marginal land to make way for large estates for cattle and grain, many of which were owned by absentee landlords who lived in England.

Given the small size and poor soil of their holdings, many of these tenant farmers had become totally dependent on the potato as the only feasible way of feeding themselves and their families.

Indeed, it is estimated that on the eve of the famine 30% of Irish people were largely or wholly dependent on potatoes for their food. To make matters worse, they were largely reliant on a single variety, the Irish Lumper, so that the entire crop failed at the same time due to lack of genetic variation.

While many of the deaths can be directly attributed to starvation, most were due to a wide range of diseases related to malnutrition and the resultant increased vulnerability to infections. In addition, the famine gave a further boost to already-high emigration rates, especially from the west of the country.

It is estimated that at the height of the famine as many as 250,000 may have left Ireland in a single year. Most went to North America, but many also emigrated to Great Britain (especially Liverpool, Glasgow and London) and to Australia.

Moreover it has been estimated that around half a million pauperised Irish tenant farmers and their families were evicted from their holdings between 1846 and 1854, adding to the misery and providing a further impetus for emigration.

Many of those going to British North America (which later became Canada) travelled in overcrowded, poorly maintained and badly provisioned vessels that became known as coffin ships due to the number of lives they claimed.

For example, of the more than 100,000 Irish that sailed to British North America in 1847, an estimated one out of five died from malnutrition and disease on the voyage over.

As the map shows, nearly all parts of Ireland experienced a decline in population between 1841 and 1851 although this decline was unevenly distributed across the country.

Only the metropolitan centres of Belfast, Dublin and Cork, which were least impacted by the famine, experienced an increase, partly due to an influx of famine victims from rural areas. Broadly speaking, the decline was greatest in the west and south, less so in the east and north.

These differences largely reflect the distribution of the marginalized rural population of tenant farmers and their relative vulnerability to the famine.

Both Ulster and Leinster had major ports that not only increased in population themselves, but rendered neighbouring parts of those provinces more accessible for imported relief supplies. Moreover, many farmers in Leinster depended relatively more on cereal crops, while many of those in Ulster grew flax (for making linen) as a cash crop which enabled to purchase food during the famine years.

A further mitigating factor in the case of Ulster was the existence of ‘tenant right’ whereby tenants were compensated for any improvements they made to their holdings. This gave them an incentive to make such improvements thus reducing their vulnerability.

Nevertheless parts of these two provinces, especially south-west Ulster and the western part of Leinster, were indeed hard-hit by the famine and suffered major declines in population. However, in the end, the impact of the famine was felt most keenly in Connaught and the west of Munster.

These areas had the poorest land, the greatest reliance on the potato, were the least accessible when it came to relief efforts and suffered the highest rate of evictions.

One of the most contentious aspects of the famine was the role played by the British government, which had assumed responsibility for Ireland under the Act of Union of Great Britain and Ireland in 1801.

In particular, the government has been sharply criticised for not doing more to halt the export of grain, cattle and other agriculture products from Ireland during the famine period. This is not to say that the government did nothing to alleviate the situation.

At the outset of the famine the then Tory government under Sir Robert Peel arranged for the import of large quantities of maize, mostly from the United States. It also set up a Relief Commission to distribute food at cost and established locally funded work schemes that together kept the death toll at bay in 1845.

However, in July 1846 the Tory government was replaced by the Whig government under Lord John Russell, which embraced the doctrine of laissez-faire (non-interference in the economy).

In keeping with this philosophy it scaled back the government relief schemes and placed more reliance on the market and on merchants to ensure continuing supplies of food: a strategy that proved totally inadequate to address a rapidly deteriorating situation.

In May 1847 the government did set up a network of soup kitchens, which proved quite effective, but this program was terminated only six months later, possibly because it was seen as inconsistent with laissez-faire. After that primary responsibility for relief was left in the hands of overcrowded and disease-ridden workhouses.

Moreover, the government did nothing to stem the mass evictions or provide safer passage for those who emigrated.

Nevertheless, the situation would have been even worse if it hadn’t been for private charities, especially in England and North America, which raised substantial sums of money for relief supplies, including a £2,000 donation from Queen Victoria herself.

The failure of the government to combat the famine effectively was not only due to the baleful impact of laissez faire. Some people cynically viewed the famine as an act of Providence that offered a solution to the problem of a highly inefficient and abusive agrarian regime.

Most insidiously, it was viewed by many as a moral judgement on the perceived deficiencies of the Irish national character. This blatant ethnic prejudice encouraged the spread of famine fatigue on the part of the British establishment, further sapping the political will to act more decisively.

While opinion is divided on whether the failure of the government to take more effective action amounted to genocide, there is no doubt that its reaction was woefully inadequate and that it could have done far more to alleviate the situation.

The famine had a profound long-term impact on Ireland both politically and demographically. It fanned the already-existing flame of resentment that the Irish felt at the way they had been treated by the English in the past and gave further impetus to the movement for Irish independence.

This culminated in the establishment of the Irish Free State in 1922, which later became the Republic of Ireland.

After the famine the population of Ireland declined further as emigration continued and the birthrate fell. By the 1911 census, the island’s population had fallen to 4.4 million. Although it has since increased, even today the total population of the island of Ireland is only around 6.4 million, which still leaves it 1.8 million (or almost 22%) less than it was in 1841.

If you’d like to learn even more about the Famine, the following books are a good place to start: