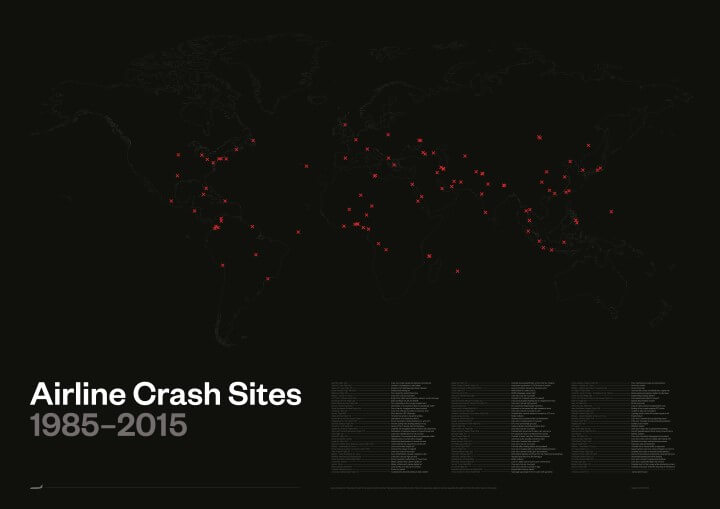 Map created by Mat at SFHAA

If you have a fear of flying you should skip this map because it shows the locations of the largest plane crashes between 1985-2015.

The map was sent to me by Mat who had this to say about it (edited slightly to avoid repetition):

The map data is from http://www.planecrashinfo.com [warning some images may be disturbing]. Originally I had wanted to take data from Wikipedia, which I did begin doing, but it’s a very time-consuming way to collect the data-set when there are reliable websites that already have the data I wanted.

I haven’t focussed on another data-vis piece of design here, there are plenty of those out there already. My map is strictly a cartographic horror exercise (I have a fear of flying).

The locations of airline crash sites communicate something about what has happened in certain places, and the information on the bottom of the page lists the airline and flight number and the reason for the crash (taken from communication records from recovered black boxes, or air traffic control).

To my knowledge the data I have used is correct but I included a disclaimer not to take it too seriously (i.e. don’t rely on it 100% for investigative or journalistic purposes, etc.).

Another original intention was to remove the country outlines altogether and let the crash sites themselves hint at an abstracted map of the world. But it was a bit too vague! So the outlines remain…

Those with a morbid interest in plane crashes may be enjoy the following books:

For the rest of you, the following may be of help:

Finally if you want to fall in love with flying again, you may want to read Skyfaring: A Journey with a Pilot.