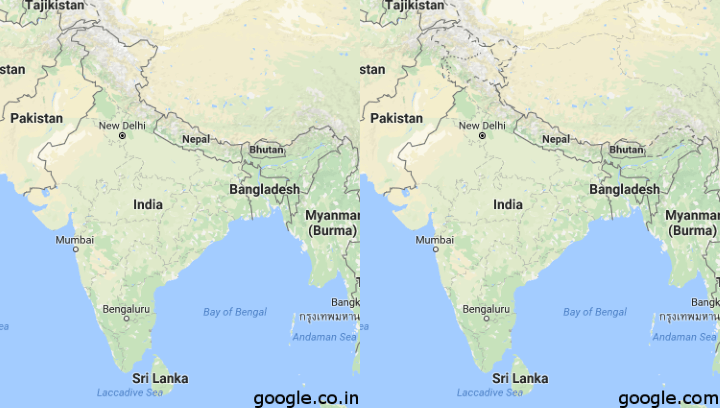 The major difference of course is how Kashmir is shown. Google.com tries to show how complicated the situation on the ground really is, whereas Google.co.in simply shows the entire region belonging to India.

And if you’re wondering why the Tajikistan-China border shown as a dotted line? Reddit user T9C-gars has an explanation:

After the dissolution of the Soviet Union and after the Tajkistan civil war, China was one of the only entities which would lend money to Tajikistan (others would not do so because of the autocratic regime in Tajikistan which was showing no interest in promoting economic activity or stimulating the country’s GDP, and thus presented no evidence of ever being able to pay back its debts).

China never truly accepted its border with the Soviet Union (and subsequently with Tajikistan). In fact, China always claimed a large chunk of the Eastern Tajikistan Pamir mountain range (an offshoot of the Himalayas extending up into the TianShan mountain range).

Because Tajikistan would never be able to repay its outstanding financial debt to China, the Tajik government struck an agreement with Beijing. In 2011 Tajikistan agreed to move its border 2km back from the 2010 border in exchange for debt forgiveness from China (but it still only constituted 5% of the Tajik land claimed by China [Edit: Receding the border by 2km does not sound like much, but actually it constitued around a whopping 1100sq kms to be ceded to China]).

China accepted the terms, and thus the border is now situated 2km west of where it previously sat.

For the Tajik government and for China, the issue is now closed. But for opposition parties in Tajikistan and other interested parties (which are heavily repressed by the Tajik government), this was not a deal they acquiesced to. You can be sure that if the current dictatorship in Tajikistan ever collapses, that the issues of the contentious border demarcation will once again be in the fore.

And therefore for many people, the question of the border’s location is not settled… hence the dotted line.

To learn more about the complicated situation in Kashmir have a look at the following books:

Enjoy this map? Please share it with a friend: