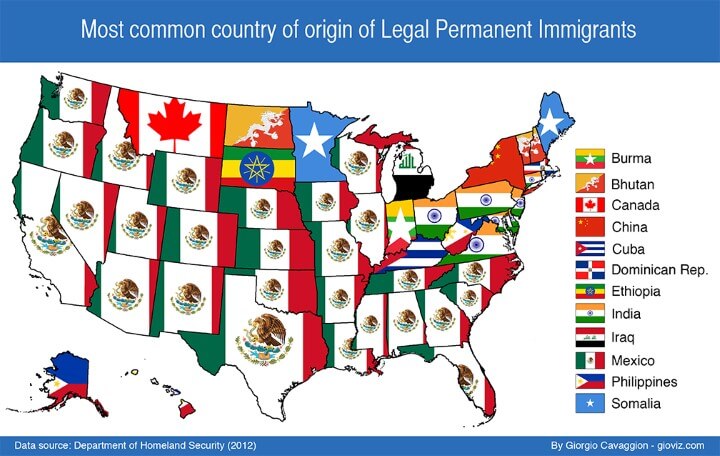 Inspired by Ben Blatt’s What are the biggest immigrant groups in your state?, Giorgio Cavaggion created two flag maps of the most common country of origin of new legal immigrants to the United States.

The data originally came from the Department of Homeland Security (DHS) and is only a snapshot of 2012. That year just over 1 million people became Legal Permanent Residents.

Legal permanent residents (LPRs), as defined by the DHS:

… are foreign nationals who have been granted the right to reside permanently in the United States. LPRs are often referred to simply as “immigrants,” but they are also known as “permanent resident aliens” and “green card holders.”

In total nearly 150,000 came from Mexico in 2012, followed by China and India. As you can see above this means that Mexicans are the largest group in the majority of states (27), followed by India (7).

However, keep in mind there is a huge variance in the numbers between states. For example, California had 196,000 new legal permanent residents while Wyoming had just 427.

Below you can see what the map would look like without Mexico: 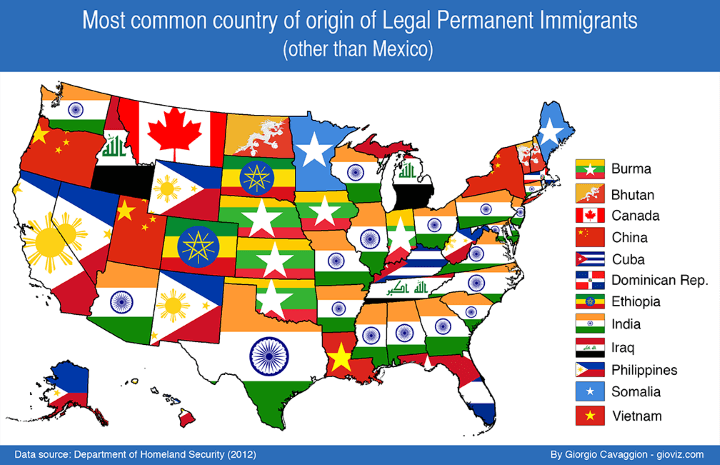 In this scenario Indians are the largest group in 19 states, Filipinos in 7 states and Burmese in 5 states.

Unexpected countries of origin such as Burma (Myanmar), Bhutan, Ethiopia, Iraq and Somalia could be the result of resettled refugees and those granted asylum.

You can learn more about these maps from the GioViz.com website.