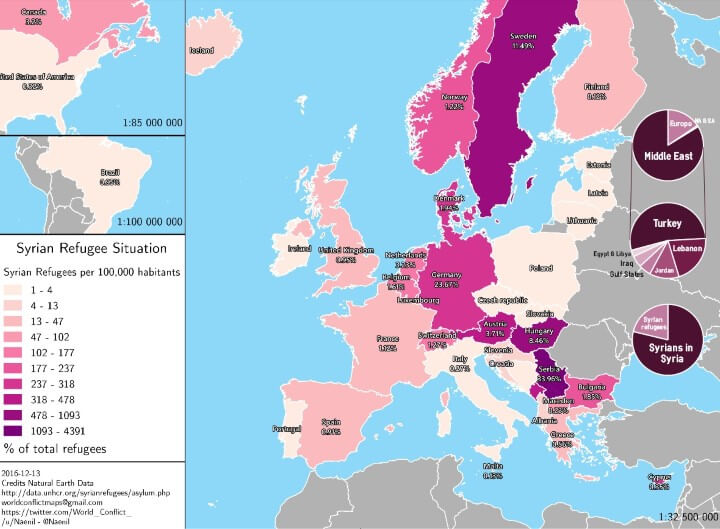 The map above shows which European countries are taking in the largest numbers of Syrian refugees both in absolute and relative terms.

The map is based on data from the UNHCR. They note that:

The number of Syrians arriving in Europe seeking international protection continues to increase. However, it remains low compared to Syria`s neighboring countries, with slightly more than 10% of those who have fled the conflict seeking safety in Europe.

While Syrian refugees in Germany get the bulk of the headlines, it’s Serbia that hosts the greatest share of Syrians in Europe, with 33% of the total.

At the other extreme you have countries such as the UK which are taking in less than 1% of the total, roughly the same number as Brazil.

On the other hand countries such as Jordan, Lebanon and most notably Turkey have each individually taken in more refugees than all European countries combined.

If you’d like to learn more about the situation in Syria have a look at the following books:

If you’d like to help Syrian refugees, the following organisations can help:

And if you’d like to better understand the the history of Syria, have a look at our map: French Mandate for Syria and The Lebanon In 1922.

If you found this map informative, please help us share it.