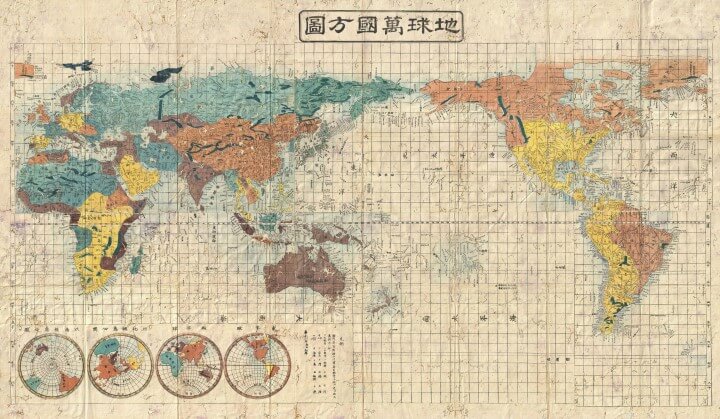 The map above is interesting not because it looks beautiful, which it does, but because of where and when it was published.

1853 (Kaei 6) was rather important year in Japanese history. It’s when the Sakoku (aka locked country) foreign policy, followed by the Japanese Tokugawa Shogunate for 250 years, was forced to come to end due to the arrival of Commodore Matthew Perry’s Black Ships in Edo (Tokyo) Bay.

Between 1603 and 1853 the Tokugawa Shogunate strictly enforced a policy that almost, but not entirely, cut off Japan from the rest of the world. Japanese could not leave Japan and foreigners could only enter the island port of Dejima in Nagasaki Bay.

Prior to the arrival of the American sailors in Edo harbour, all Western knowledge came via the Dutch from their outpost in Dejima. And contrary to popular myth, the Japanese had a relatively good understanding of the outside world, even if their cartographic techniques were a couple of centuries out of date.

So given the fact that a map as accurate as this could be produced the same year as Japan’s self-imposed isolation was forced to end, is a fairly remarkable feat. It’s a small example showing how quickly the Japanese were able to adapt to the new international situation in which they found themselves.

The map itself is titled: Shintei – Chikyu Bankoku Hozu (Square Map of all the Countries on the Globe) and uses a cylindrical projection and was printed on woodblocks and hand painted. Inserting things to note include:

Want to learn more about this period in Japanese history? Then have a look at the following books:

Did you enjoy this map? Then please consider sharing it.