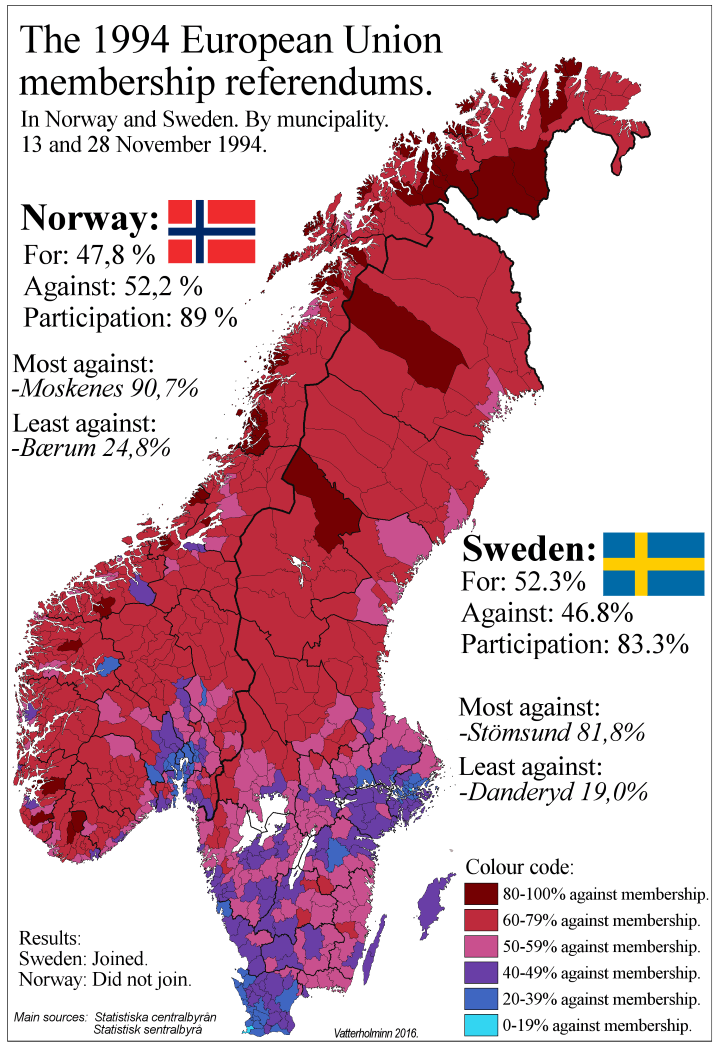 The map above shows the results of two separate referendums held in November 1994 on whether or not Norway and/or Sweden would join the EU. The map shows the breakdown by municipality in each country. Keep reading to learn more about each campaign:

Norway held a referendum on joining the European Union (EU) on November 27 and 28 1994. This followed a long and heated debate which pitted Anne Enger Lahnstein and the Centre Party on the “no” side against Prime Minister Gro Harlem Brundtland and the Labour Party on the “yes” side.

The “no” side argued that joining the EU would entail a loss of sovereignty and that Norway’s economy, which was based heavily on natural resources (especially oil and fish), was fundamentally different from the more industrialized economy of the EU.

The main arguments on the “yes” side were that as a European country Norway belonged in the EU and would benefit economically from membership.

In the end the “no” side narrowly won the day with 52.2% of the vote on a turnout of 88.6%. Only 5 of Norway’s 20 counties voted in favour of joining. All five were clustered around the capital, Oslo, with Oslo itself voting 67% in favour, the highest percentage in the country.

Generally speaking the further north and more rural the location the greater was the opposition.

Norway continues to be heavily dependent on the EU as a trading partner and is closely bound to the EU through its membership in the European Free Trade Association (EFTA).

Its membership of EFTA makes it part of the European Economic Area (EEA), which provides for free movement of most goods, as well as services and capital within both the EU and the EFTA countries, which also include Iceland and Liechtenstein.

Norway is also a member of the Schengen Area which provides for the free movement of workers among EFTA and most EU countries.

Although it did not join the EU, Norway’s sovereignty remains highly circumscribed. Its close relationship with the EU has required it to implement about three quarters of EU legislation over which it has no control.

Norway also participates in and provides financial support to several of the Union’s programmes, bodies and initiatives, including those related to security and defence. Also, as a signatory to the EEA Agreement, is also required to make financial contributions aimed at reducing economic and social disparities within the EEA.

According to a recent article in The Economist, even though Norway is not a member of the EU, its per capita financial contributions to the EU budget are around 80-90% of those of the UK.

Sweden had held a non-binding referendum on joining the EU on November 13, 1994, some two weeks earlier than Norway.

The result was almost the mirror image of the Norwegian vote, with 53.3% in favour of joining and 46.8% against. As with Norway, the turnout was high at 83.3%.

In contrast with Norway, the Swedish left was largely opposed to membership. The governing Social Democratic Party was deeply split on the issue and took no official position, allowing its members to support or oppose as they saw fit.

The overall pattern of voting was similar to Norway in that the major urban centres, such as Stockholm, Gothenburg, Malmo an Uppsala voted in favour of joining, while rural and northern areas were strongly opposed.

One factor that may have tipped the balance in favour of joining was the focus towards the end of the campaign on the potential costs of staying outside the EU, including a possible collapse in the currency and increase in interest rates that would necessitate further austerity measures.

Moreover, the Swedish economy is much less dependent on natural resources than that of Norway, which may also have been a factor.

Although the referendum was non-binding, all parties in the Riksdag had promised ahead of time to respect the outcome of the vote and Sweden joined the EU on 1 January 1995.

If you’d like to learn more about Norway & Sweden and the EU, you may enjoy the following books:

If you enjoyed this post please help us by sharing it: