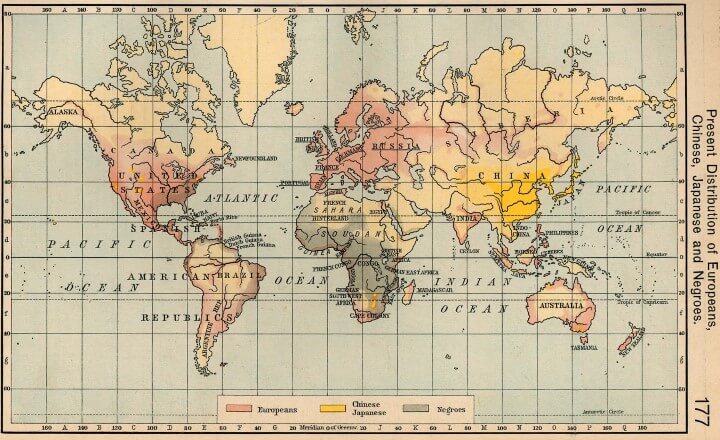 Map from the 1911 Historical Atlas by William R. Shepherd

The map above is possibly one of the least useful (and also vaguely racist) ethnic maps ever created. Titled “Present Distribution of Europeans, Chinese, Japanese and Negroes,” it was published in William R. Shepherd’s 1911 Historical Atlas.

Essentially the map boil down the world into three ethnic groups: Europeans, Chinese and Japanese (because they view themselves as the same…) and Negroes. There are so many things wrong with the map that it’s difficult to know where to begin.

For one, it leaves out the majority of the world’s peoples such as Indians, Arabs, Persians, Indigenous peoples, etc., erasing them from the map. For groups that are included, they’re all just lumped together as if they’re the same.

Finally, the map is Eurocentric in the extreme. It vastly overstates the share of people of European ancestry living abroad. For example, if you only used this map as your point of reference, you’d think that all of coastal India and Indonesia were filled with Europeans.

Of course, all mapmakers have to choose what to include and exclude from the maps they make. Unfortunately, so much is excluded, and what’s included is highly suspect, that this map is at best useless in telling you about how the world looked in 1911.

This a shame because many of the other maps from the book are fascinating. You can have a look at them on the Perry-Castañeda Library Map Collection for free.

Notice anything else strange about this map? Leave your comments below: