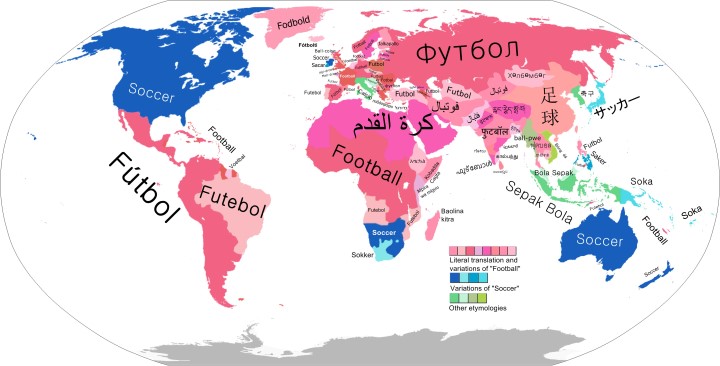 Map showing use of ‘football’ vs ‘soccer’, creatd by reddit user reddripper

Depending on where you live, football and soccer can refer to completely different games. For example, in America football refers to American football whereas in the UK it refers to association football, which in America would be called soccer.

There are two popular theories about the origins of the the term ‘football.’ Either it was a game that involved kicking a ball around with your feet or it was simply a game played on foot. If the latter origin is true, then football in the American, sense should also be considered correct.

In any case the map at the top of the page looks at the use of ‘football’ and ‘soccer’ to refer to association football. The data used to create it came from Wikipedia. There are some interesting and perhaps counter intuitive findings:

You can learn more about the game from the following books:

What do you think of the football vs soccer debate. Leave your thoughts in the comment section below: