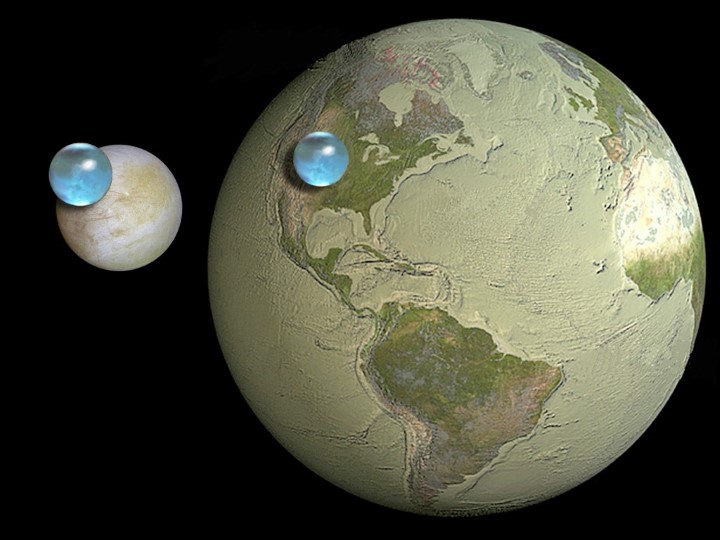 Most of us tend to think of Earth as being the sole planet in the solar system with water. Water exists on Mars, but almost exclusively as ice.

For the time being, Earth remains the lone planet in the universe to have stable bodies of liquid water on its surface. However, it may not be the celestial body with the most water or even the most liquid water within our own solar system.

That honour may go to Jupiter’s sixth moon Europa. NASA states that: “If Europa’s ocean is proven to exist, it would possess more than twice as much water as Earth.”

However, if you’re thinking of crystal clear oceans that haven’t been spoiled by humans, think again. Remember, Earth is the only known planet to have stable bodies of water on its surface.

Europa is covered in a very thick sheet of ice. The oceans are thought to begin 20 to 50 kms (12 to 30 miles) below the surface.

To put that into perspective, the deepest point of the Mariana Trench is only 10km below sea level.

So why does it matter whether or not there’s water on Europa?

Scientists think that Europa may be one of, if not the, best places in the solar system to discover extra-terrestrial life. Although it would be quite different from life on Earth and is unlikely to be intelligent.

Below Europa’s vast ice sheet are thought to be liquid oceans (scientists still aren’t 100% sure about this). The warmth from volcanic activity and the presence of liquid water would create the ideal conditions under which life could in theory evolve.

To find out more about this, NASA is going to launch The Europa Clipper, which will place a satellite in orbit around Europa to study it in greater detail. The mission is still in the very early planning stages, but $30 million has been committed to the project.

Want to learn even more? Then have a look at the following books:

How likely do you think it is that we’ll find life on Europa? Leave your comments below: