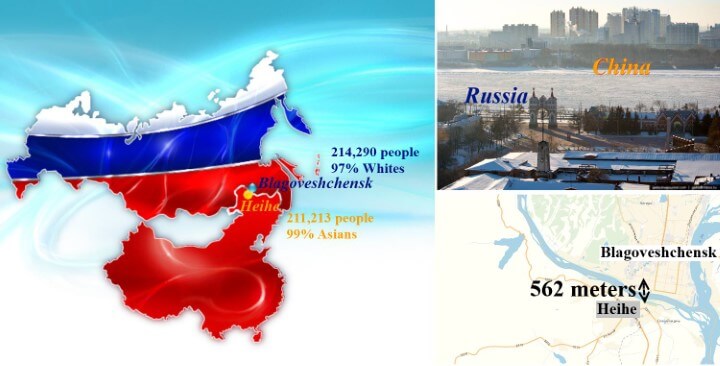 At 2,824 kilometres, the Amur River (known in China as the Heilong Jiang or “Black Dragon River”) is the 10th longest in the world. For much of its length it forms the border between Russia and China.

At its confluence with the Zeya are two cities of roughly equal size which face each other across the Amur, less than 600 metres apart.

These are the Russian city of Blagoveshchensk, administrative capital of the Amur region, and the Chinese city of Heihe in Heilongjiang province.

Although brought together by geography, these two cities have been separated by history and are very different from each other.

Prior to the Treaty of Aigun in 1858 the area north of the Amur, in what is now Russian territory, had been part of Imperial China.

Following the Treaty, which ceded the land to Russia, Tsar Alexander II approved the founding of the city of Blagoveshchensk, which literally means “the city of good news”, after the parish Church of the Annunciation.

At this time Heihe did not exist, although in the 1650s a small town had been established by the indigenous Ducher people some 30 kilometres to the south.

The Treaty of Aigun bred resentment among the Chinese, who felt they had been forced to sign it when in a weakened state. This resentment of foreign domination resurfaced during the Boxer Rebellion of 1900. As part of that rebellion the Qing Imperial Army and the Boxer insurgents shelled the city of Blagoveshchensk which, at that time, included a significant Chinese population.

These Chinese were viewed with suspicion by the Russian authorities as potential “fifth columnists” and in July of 1900 the Police Chief and the Military Governor ordered the deportation of the entire group. The deportees were taken to a narrow point in the Amur and ordered to leave, but were not given boats.

Those that refused to leave were shot while most of the rest were drowned in the attempt to cross the river. According to Chinese authorities about 5,000 people lost their lives.

For much of the twentieth century the border between Russia (later the USSR) and China remained closed. Hostilities flared up again in 1969, including a battle over a disputed island downstream from Blagoveshchensk that cost the lives of hundreds of soldiers.

The border was finally reopened in 1989. At that time Heihe, which had been established only nine years earlier in 1980, was little more than a village, but it grew very quickly after the border was opened.

After 1989 there was a rapid increase in traffic between the two sides of the Amur. The main driving force was the availability of cheap goods, such as clothes and electronics, on the Chinese side. This gave rise to the “suitcase trade” in which Russians from Blagoveshchensk crossed by ferry to Heihe and returned with suitcases stuffed with Chinese goods to resell in Russia for a profit.

Since trade with Russia was a large part of Heihe’s raison d’être, Russians were permitted to cross into the city without visas for short visits.

Although there is currently no permanent bridge linking the two cities (one is under construction) the Amur is frozen for several months each winter and for 60 -70 days each year it is possible to cross by means of a floating ice bridge 614 metres long and 13 metres wide.

The inhabitants of Heihe did everything they could to encourage this trade. Many learned to speak some Russian and they put up Russian signs, provided Cyrillic versions on street signage and opened many restaurants and shops to cater to Russian visitors.

They even installed some Russian-themed statues and street furniture, although a well-intentioned initiative to design garbage cans in the shape of traditional Russian nesting dolls was not well-received by some Russians.

The city also staged a night-time lightshow on its waterfront in the hope that it would attract Russian customers. While it may have had this effect, it also bred resentment among some in Blagoveshchensk who saw it as Heihe flaunting its modernity.

A by-product of all these efforts to attract Russians was that Heihe became a destination for Chinese tourists who sought to experience a bit of Russia without having to visit the country itself.

The central area includes some faux-Russian architecture, which adds to the illusion of being in Russia.

The inhabitants of Blagoveshchensk did not reciprocate. Few learned Chinese and there was there was no great effort to encourage visitors from Heihe. There were almost no Chinese signs and, apart from a few Chinese restaurants, no shops catering to Chinese traders.

Some of this may have had to do with wariness over growing Chinese influence given the population disparities in the region. One writer reports that the authorities were seeking to shut down the local Confucius Institute over suspicions that it was being used as an instrument to project Chinese soft power.

Moreover, the Russian government began to have misgivings over the “suitcase trade” and started to reduce the quantity of goods that could be brought in duty-free as well as the frequency of trips allowed.

The situation changed in 2014 with the collapse of the rouble against the Chinese currency following the slump in the price of oil and the introduction of sanctions against Russia in retaliation for its annexation of Crimea.

As a result the “suitcase trade” ceased to be profitable and Chinese merchants who had set up shop in Blagoveshchensk, many of whom were there on tourist visas, were required to leave. Many businesses in Heihe suffered as a result.

Visitors have remarked on the contrast between the two cities.

Heihe is a modern Chinese-style city full of tall apartment blocks. One visitor has described it as clean, green and pleasantly uncrowded, at least by Chinese standards. Its river embankment has been turned into a pedestrianized promenade lined with trees and small parks and, in the summer, cafés and restaurants.

Blagoveshchensk is a much older and more settled city, with none of the brash mercantilism of Heihe. Visitors have remarked that it has a European feel to it. It features leafy tree-lined streets, some fine 19th century civic buildings and a Byzantine-style Orthodox Cathedral.

It also has some traditional wooden painted houses (now somewhat faded) dating from the Tsarist era, along with grey Soviet-era concrete apartment blocks and more modern apartment buildings. A number of modern shopping centres have sprung up and the waterfront is gradually being developed.

Although the “suitcase trade” has declined, other opportunities for interaction between the two cities have opened up. According to Chinese sources, in 2017 a new hospital was announced in Heihe catering to increasing numbers of Russians seeking healthcare services in China.

A new two-lane highway bridge linking the two cities is being constructed across the Amur and is scheduled to open in October 2019. Since it is situated downstream from the confluence with the Zeya, the connection is indirect requiring anyone wishing to go from one city centre to the other to use an existing bridge across the Zeya as well.

These developments are taking place in the context of growing the economic linkages between Russia and China as Russia has responded to the Western sanctions by looking eastwards for economic opportunity, while China has launched its “belt and road initiative” to promote connectivity and cooperation between Eurasian countries.

Meanwhile, Blagoveshchensk and Heihe continue to gaze at each other across the Amur, not in a hostile way, but with a degree of mutual incomprehension.

Although separated by only a few hundred meters of water they still remain in two different worlds, with Blagoveshchensk oriented towards Moscow and Eastern Europe and Heihe towards Beijing and the rest of China.

They are even two time zones apart.

In the end it is perhaps not surprising that they have remained ethnically separate, as shown on the map.