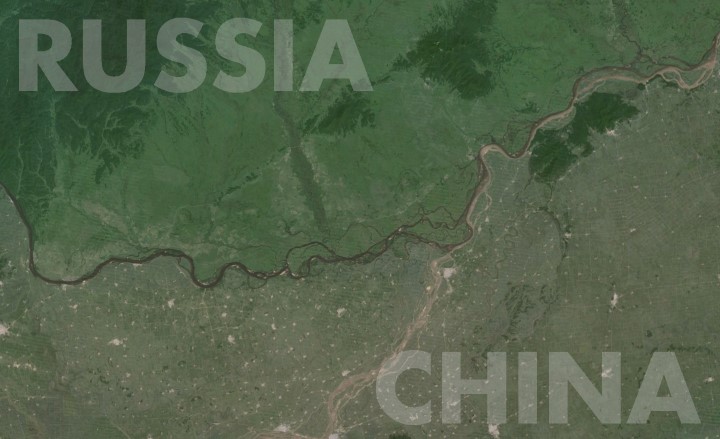 The Amur River (called the Heilong Jiang in Chinese) separates Russia’s Far East from Northeast China. And as the map shows, the contrast could not be much more striking.

Russia’s entire Far East has a population of just 6.3 million people (around half as many living in Moscow) who live in an area of 6.2 million sq km (about twice the size of India). This means on average there’s just 1 person per sq km of land.

However, the population of Northeast China, just to the south, is 107 million people (slightly more than live in the Philippines), in an area of 787,300 sq km (about the same size as Turkey). Thus the population density is around 135 people per sq km, which puts it just slightly below the Chinese average.

This divide can be very clearly seen in the map above. Populous China looks very developed while Russia looks deserted. Interestingly, the Russian part of the map above is the Jewish Autonomous Oblast, which despite its name, contains just 1,628 Jews (around 1% of the population).

Given that Russia’s side is depopulating and China’s is growing, the potential for future conflict looks like a plausible, if still remote, possibility.

You can learn more from the following books:

What do you think the future holds for the region? Leave your comments below: