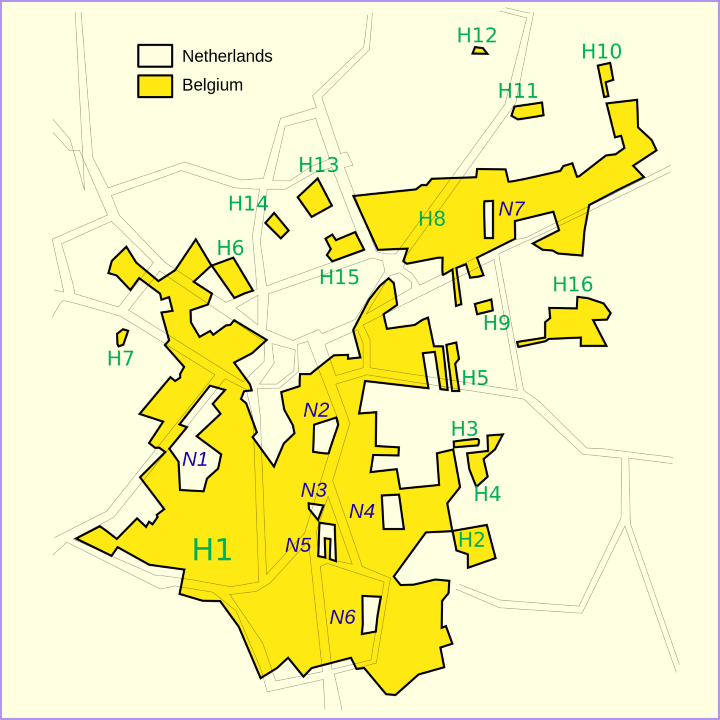 The map above shows the incredibly strange and complex border between Belgium and the Netherlands at Baarle-Hertog (Belgium) / Baarle-Nassau (Netherlands).

Baarle-Hertog is a Flemish municipality in the Belgian province of Antwerp and has a population of 2,663.

Baarle-Nassau is a municipality in the Dutch province of North Brabant and has a population of 6,626.

Baarle-Hertog consists of 26 separate parcels of land, including 22 exclaves in the Netherlands and 3 more on the border. There are also 7 Dutch exclaves within the Belgian exclaves.

The border developed as a result of various medieval treaties, agreements, land-swaps and sales between the Lords of Breda and the Dukes of Brabant and was only finalised with the 1843 Treaty of Maastricht, 13 years after Belgium declared independence from the Netherlands.

The border divides some houses between the two countries and has had some interesting commercial side effects:

For many years the shops in Belgium were open on Sundays, those in the Netherlands not – with the exception of those in Baarle. Taxes in Belgium and The Netherlands differed sometimes a lot, so one could go shopping between two tax-regimes in one single street. There was a time when according to Dutch laws restaurants had to close earlier. For some restaurants on the border it meant that the clients simply had to change their tables to the Belgian side.

Now that both countries are in the EU, Eurozone and part of the Schengen Area, the differences are now somewhat less important, but no less interesting.