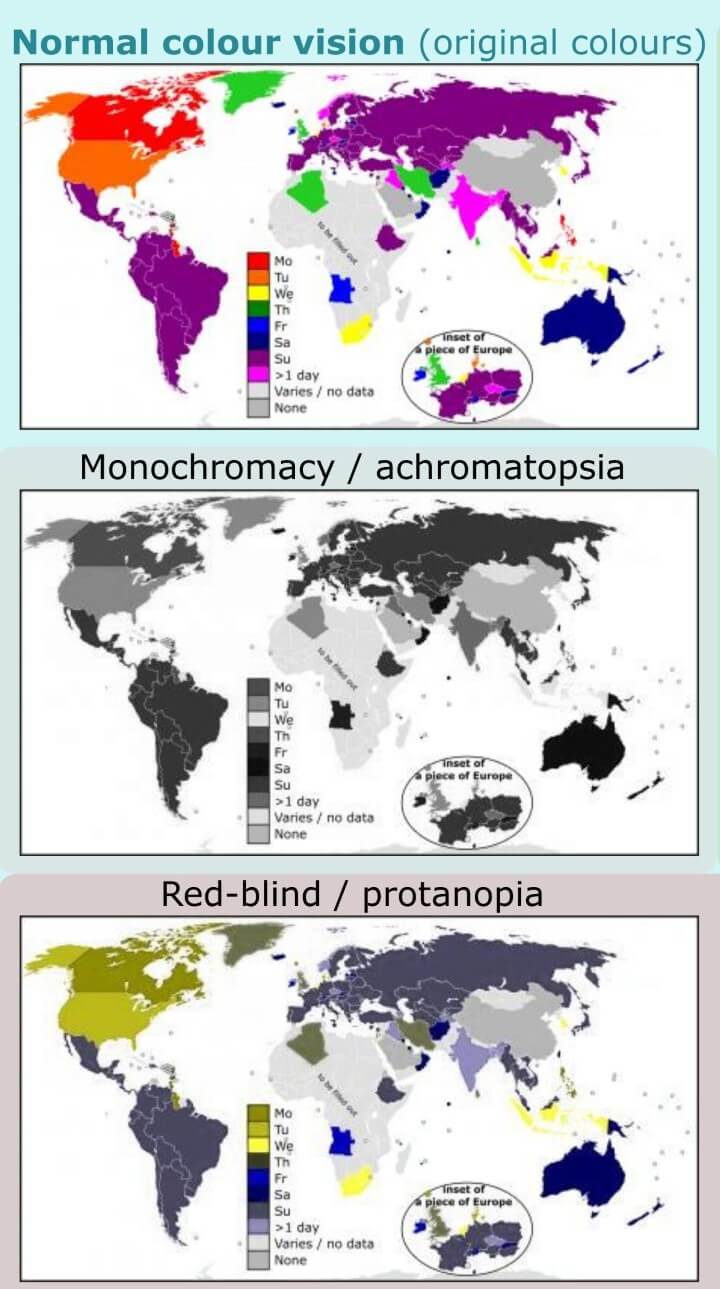 The maps above and below show how the world looks to people with different types of colour blindness.

Up to 8% of men and 0.4% of women in the world may have some colour blindness. In absolute numbers, this translates into as many as 296 million men and 15 million women.

We’ve written previously about how difficult it can be to navigate for those with colour blindness.

In the examples presented here, we look at how yesterday’s What Day of The Week Elections Are Normally Held map looks to people with different types of colour blindness. The maps were crated using the Coblis: Color Blindness Simulator

Here are some more details about each type of colour blindness examined:

Monochromacy/Achromatopsia: Basically seeing the world in black and white (and shades of grey). Achromatopsia is thought to affect up to 1 in 40,000 people born.

Red-Blind/Protanopia: Basically the inability to see red and also difficulty distinguishing between blue and green and red and green. It is one of the more common types of colour blindness in men and affects up to 1% of all males on earth. 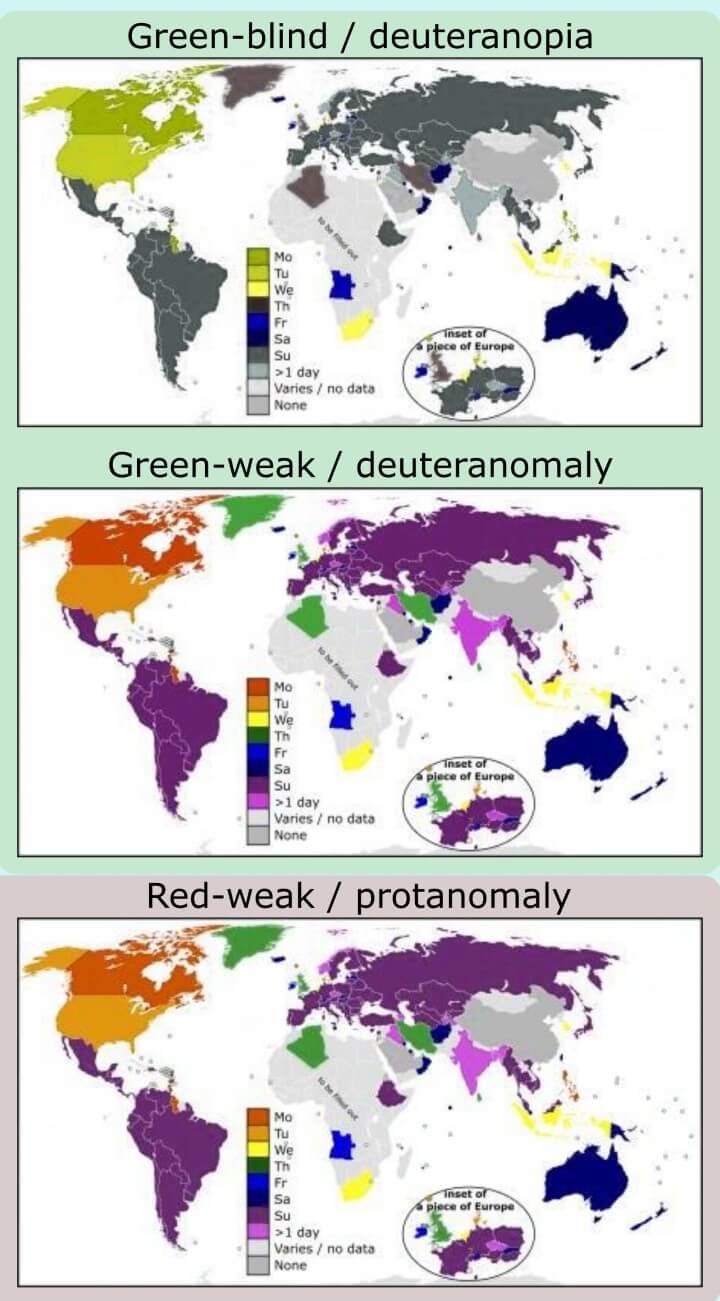 Green-Blind/Deuteranopia: Similar to Protanopia except the inability to see green rather than red. Once again it affects around 1% of males.

Green-Weak/Deuteranomaly: By far the most common type of colour blindness. Rather than the inability to distinguish red from green, it’s just more difficult to do so. Rather than missing cones they just malfunction. Up to 5% of men might suffer from Deuteranomaly.

Red-Weak/Protanomaly: Very similar to Deuteranomaly except that it’s the red cone that is malfunctioning rather than the green one, but the effect is quite similar, a diffiuclty disgusihing between red and green hues. It affects up to 1% of males. 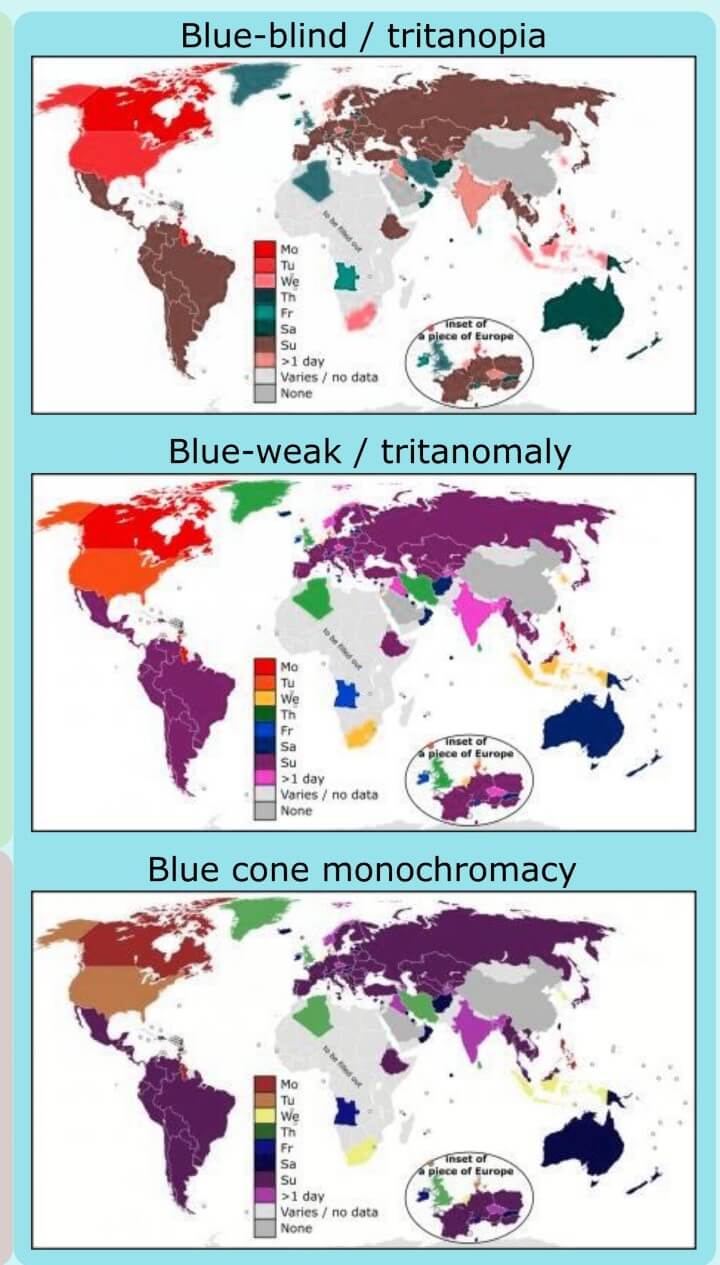 Blue-Blind/Tritanopia: Blue and violet look greenish and dimmed and can sometimes look black, yellow and pink are indistinguishable and purple colours can appear red. It is relatively rare affecting less than 1% of men and women.

Blue Cone Monochromacy: Affects fewer than 1 in 100,000 people and can make them sensitive to light, have poor central vision, and results in poor colour discrimination.

If you’d like to learn more about colour blindness the following books and resources may be of interest: