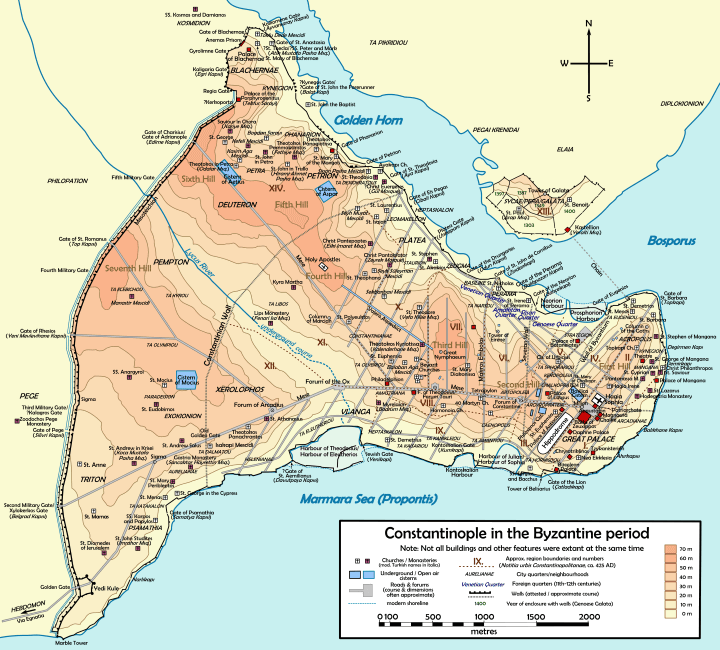 Topographical map of Constantinople during the Byzantine period, by Cplakidas via Wikimedia

Constantinople has been the capital of 4 different empires during its long history. The Roman, Byzantine (or Eastern Roman), Latin and Ottoman empires all coveted the city due to its strategic and commercial importance.

The map above depicts the city as it would have looked during the Byzantine period, which ended in 1453 with the conquest of the city by the Ottoman Turks. Interestingly, no one in Constantinople at that time would have thought of themselves as living in the Byzantine Empire. Instead they viewed themselves as the direct descents of the Romans and continued to refer to their country as the Eastern Roman Empire or just Roman Empire right up until its demise.

Roman Emperor Constantine the Great made it the capital of the whole of the Roman Empire in 330 AD. Like Rome it was built on 7 hills and by the 10th century, the city had grown to be the largest and wealthiest city in Europe with perhaps as many as 500,000 people living it.

Due to its wealth, it made a tempting target for many foreign enemies. However, it was well defended with the double Theodosian Walls completed in 413 protecting it from attacks on land and the Sea Walls and chain to block attacks from the sea (both visible on the map above).

This meant the city survived as the capital of the Byzantine Empire until 1204, when it was first captured by Latin Crusaders in 1204. The crusaders were then in turn defeated by the Byzantines in 1261. They manged to hold on the city for another 200 years until 1453, when Ottoman cannon technology became advanced enough to breach the walls and the Byzantines Empire came to an end.

The summary above hardly does the city justice, so if you’d like to learn more, I highly recommend you have a look at:

Would you have liked to have lived in Constantinople? Why or why not?