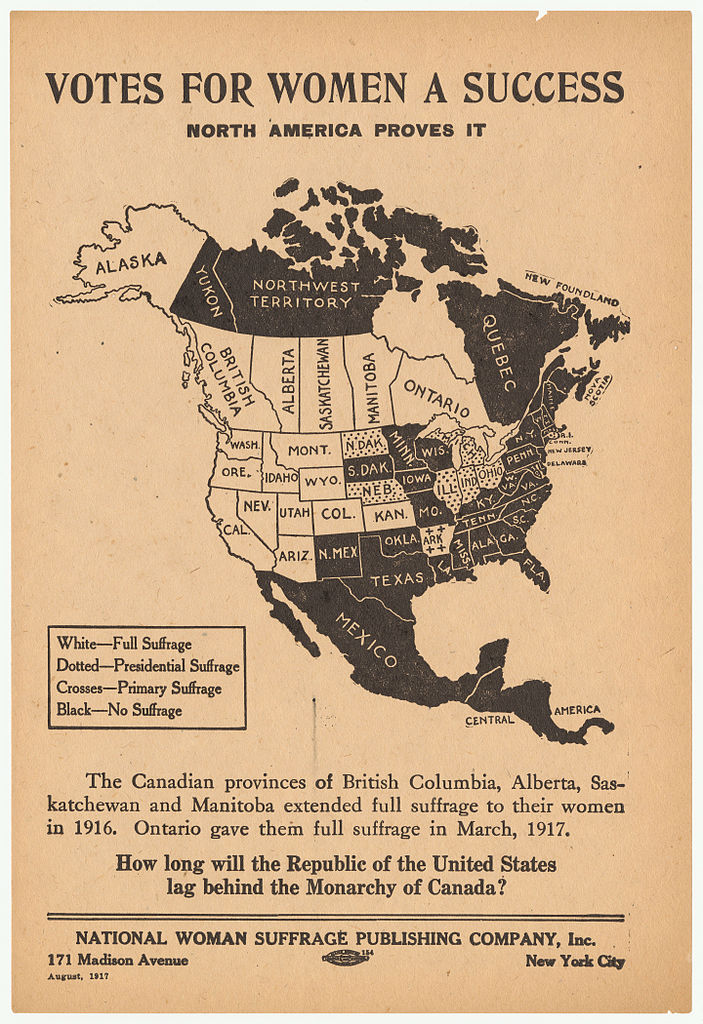 In 1917, Illinois, Indiana, Michigan, Nebraska, North Dakota, and Ohio did offer Presidential suffrage, meaning women could vote for the President, but were restricted from voting in other elections (e.g. House of Representatives, Senate, State elections and/or municipal ones).

Arkansas on the other hand, allowed women to vote in primary, but not general elections.

The full title of the map is ‘Votes for Women a Success: North America Proves It‘. and was published by the National Woman Suffrage Publishing Co. in August 1917.

The message below the map reads: “The Canadian provinces of British Columbia, Alberta, Saskatchewan and Manitoba extended full suffrage to their women in 1916. Ontario gave them full suffrage in March, 1917.”

Then the final message, which as a Canadian, made me laugh: “How Long Will the Republic of the United States lag behind the Monarchy of Canada?”

While many US States would grant women the right to vote in the years following the publication of this map (see 1919 Women’s Suffrage Victory Map), full women’s suffrage would not be realised in the United States until 1920 with the ratification of The Nineteenth Amendment to the U.S. Constitution.

Despite its passage, women of color, including Blacks and Native Americans, still faced defacto voting rights restrictions well into the 1960s in many states. It should also be noted that the voting age at the time was restricted to those 21 and over and not 18 and over like today.

At the Federal (national) level, Canada granted limited female franchise in 1917, followed by full women’s suffrage (for most women) in 1918. However, at the provincial level, Quebec was the last holdout, only granting women the right to vote in provincial elections in 1940!

And if you’re curious about Mexico, it only offered women the vote in 1947 and only at the municipal level. It did not offer full female suffrage until 1953.

To learn more about women’s suffrage in the United States and Canada have a look at the following books:

Find this map and topic interesting? Please help us by sharing it below: