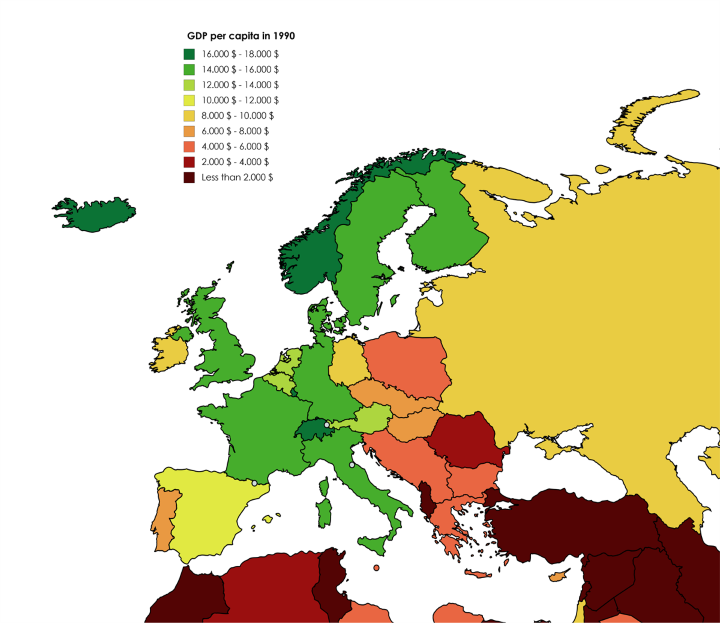 The map above, which shows GDP per capita for European countries in 1990 (just as the Iron Curtain was falling), reveals a general increase as one travels from east to west and from south to north. It also invites the question of what may have changed in the intervening quarter century.

The table below, which is based on World Bank data, is intended to answer this question. It includes all members of the EU and all other European countries with populations greater than 100K, for a total of 41 countries.

The table lists GDP per capita in terms of Purchasing Power Parity (PPP) in constant 2011 international $ in order to give an, admittedly imperfect (see note below), idea of the relative standard of living in different countries and how it has changed from the situation shown on this map.

A base year of 1995 was selected, rather than 1990, since by that year data were available for most current European countries.

Although the national status of Kosovo is contested, it has been included since it appears separately in the World Bank data.

The 1995 rankings for Montenegro and Kosovo are estimates, based on data for subsequent years.

In practice PPP is very difficult to measure. Furthermore, while GDP per capita as measured in terms of PPP should give a better idea of overall standard for living than nominal GDP per capita, it is an average and does not address the distribution of purchasing power among the population.

Moreover, GDP itself is an imprecise measure of national prosperity. For example, it does not include the value of many non-market transactions. For a discussion of the limitations of GDP see: The Economists’ article The trouble with GDP

The table suggests that between 1995 and 2016 the rankings of most countries did not change significantly (30 countries changed rankings up or down by three or less).

However, there are some notable exceptions. The position of Ireland has improved dramatically (+13). Other countries that have moved up more than three places are Lithuania (+7), Iceland (+5), Estonia (+5), Malta (+5) and Sweden (+4).

On the negative side those experiencing the biggest reduction in ranking are Greece and Italy (both at -8), while others that have slipped by more than three places are Portugal (-6), Croatia (-5), and Cyprus (-4).

All countries experienced a gain in average living standards during the period in question. The two right-hand columns indicate the magnitude of those gains and the associated ranking.

The greatest gains were achieved by Ireland, Luxembourg, Lithuania and Iceland, while among the countries for which comparative data are available Italy, Moldova, Ukraine and Greece gained the least.

There is some evidence that the tendency for GDP to increase as one travels from south to north, as indicated in the 1990 map, may actually have become stronger in the intervening years.

However, the increase as one travels from east to west is arguably less pronounced than in 1990. While seven countries in Eastern Europe are, indeed, among the bottom ten in terms of gains, six are also in the top ten, including the three Baltic States, as well as Slovakia, Poland and Sweden, all of which are members of the EU.