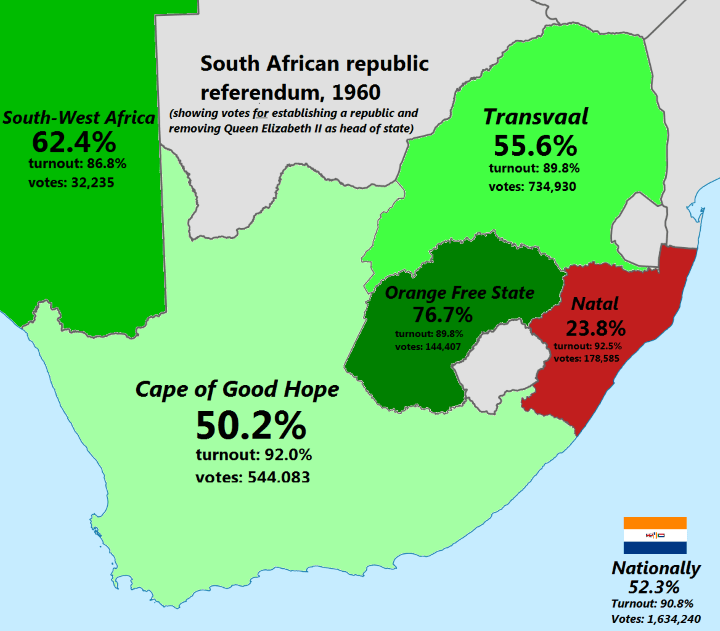 On October 5 1960, South Africa held a referendum on severing its ties to the British Crown and becoming a republic.

The republican side was spearheaded by the Afrikaner-dominated National Party under Hendrik Verwoerd. The pattern of votes reflects the history and consequent distribution of the Afrikaner people.

The Afrikaners were descendants of the Boers (Dutch for farmers), whose origins were mostly Dutch; although some were ethnically German and a few were of French Huguenot stock.

They started settling in the Cape Colony of South Africa in the 17th century first under the rule of the Dutch East India Company. To escape what they saw as the Company’s despotic rule, many began to move north, which eventually led to a northward expansion of the boundaries of the colony.

In 1814, following an engagement in 1806 on the shores of Table Bay, the Cape Colony was ceded outright by Holland to the British Crown. Many Boers were just as unhappy under British rule as they had been under the Dutch East India Company.

While many of them had been moving still further north beyond the colonial border for over a century, the emancipation of slaves by the British government in 1833 encouraged still more to leave. For the Boers any move to greater equality between the black and white races was unacceptable.

This northern migration reached its height between 1835 and the early 1840s and became known as the Great Trek. The Boers then established two independent republics: Transvaal in 1852 and the Orange Free State in 1854, both of which received international recognition.

They also established the short-lived Natalia Republic on the east coast in 1839, which was promptly conquered by Britain in 1843 and renamed Natal. By 1847 nearly all the Boer settlers had left Natal to be replaced by subsidised British immigrants of whom 5,000 arrived between 1849 and 1851.

There was constant friction between the Boers and the British during the latter half of the 19th century. This culminated in the Second Boer War, which lasted from 11 October 1899 – 31 May 1902.

This was a hard-fought war with many thousands of casualties on both sides. In the end Britain prevailed and both Transvaal and the Orange Free State were absorbed into the British Empire. On May 31, 1910 the four separate colonies of Cape, Natal, Transvaal and Orange Free State were united to form the Union of South Africa, an independent country within the Empire (later the British Commonwealth).

Following World War I, the Union of South Africa was granted the administration of the German colony of South-West Africa under a mandate from League of Nations. It came to be treated in most respects as if it were another province of the Union.

The 1960 referendum was restricted to whites, who constituted 19.3% of the population at the time (the proportion is now under 10%).

Verwoerd did everything he could to ensure that the republican side would win the day. He was confident that Afrikaners, many of whom were still bitter at their defeat in the Boer War, were much more likely to favour a republic than English-speaking White South Africans.

Consequently, he lowered the voting age to 18 to benefit from the relatively greater number of young Afrikaners relative to their Anglophone counterparts. He also included white voters in South West Africa on the electoral role, where the Afrikaners and ethnic Germans, who outnumbered English-speaking whites, were strong supporters of the National Party.

Clearly, the electorate was heavily engaged in the issue. The turnout was very high everywhere, with an average of over 90%. The distribution of votes closely reflects the relative distribution of the Afrikaner and Anglophone populations, which had been determined by the history outlined above.

Thus, the republican vote was highest in the two former Boer republics of Orange Free State and Transvaal. The somewhat lower percentage in Transvaal is likely due to a concentration of English speakers in Johannesburg, the country’s largest city.

Natal with its strong Anglophone majority was the only province to vote to retain the Crown. The even split in Cape of Good Hope reflects the similar numbers of Afrikaner and Anglophone voters in that province in 1960.

Finally, although the numbers are small, the government’s decision to include South-West Africa appears to have paid off.

Although the vote closely adhered to ethnicity, a small minority of Afrikaners voted to retain the Crown, while some English speakers voted for a republic.

Having won the vote for a republic, the government then faced the question of whether South Africa should remain part of the British Commonwealth?

This would have been technically possible. For example, India had maintained its Commonwealth membership despite becoming a republic in 1950. However, many Afrikaners welcomed the possibility of leaving the Commonwealth as a further move to break with the colonial past.

In the end, the issue was decided by a number of African and Asian members of the Commonwealth who were strongly opposed to South Africa’s increasingly repressive apartheid regime and threatened to leave if South Africa were to remain a member.

In particular, memories of the Sharpeville Massacre which had taken place on March 21, 1960 (just over six months before the referendum) were still fresh in people’s minds.

The map shows the distribution of South Africa’s provinces in 1960. Since then there have been a number of changes.

South-West Africa became an independent country in 1990 and was renamed Namibia. Following the end of apartheid, South Africa ceded Walvis Bay to Namibia in 1994.

To learn more about apartheid and South African history and politics you may be interested in the following books:

Find this post informative? Then please help us by sharing it: