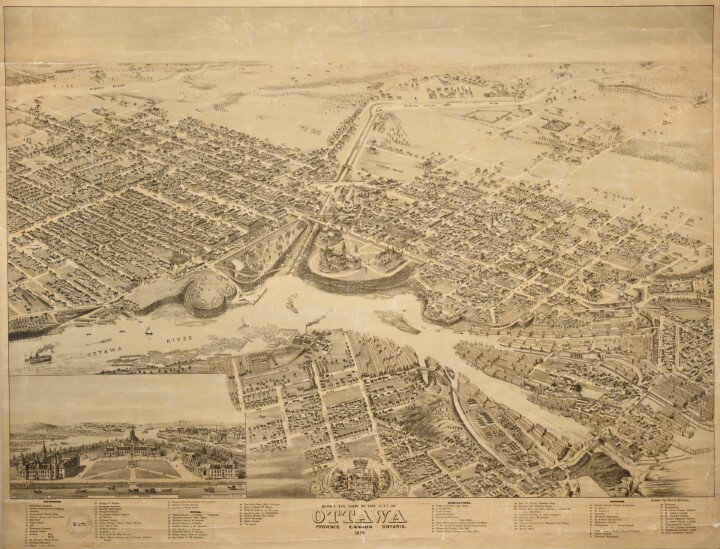 This is a view of Ottawa from 1876, only nine years after it became the capital of what was then known as the Dominion of Canada on July 1, 1867.

In the main diagram the viewer is looking more or less to the south, while the insert in the bottom left is a view of the parliamentary precinct looking roughly north.

The Ottawa River, which flows from right to left, cuts through the centre of the picture and separates the City of Hull (since renamed Gatineau) in the Province of Quebec in the foreground from the City of Ottawa in the Province of Ontario further away from the viewer. The version of the Royal Coat of Arms of Canada that was in use in 1876 is displayed in the bottom centre of the picture.

As well as being separately displayed in the insert, the buildings housing the Parliament of Canada occupy a prominent position at the centre of the picture. They sit on a limestone promontory that sticks out boldly into the Ottawa River and remain Ottawa’s most iconic image.

The entire Parliament Hill complex was finally completed in 1876, the year of this illustration, after a construction period of 16 years. Today, these buildings are not exactly as shown in the picture.

In 1916 a fire destroyed the Centre Block (the central building with the tower), which has since been replaced by a larger building. The entire complex is currently undergoing a massive restoration, costing around CDN $3 billion and scheduled for completion in 2028.

Another prominent feature in the picture is the Rideau Canal, which starts just to the left of the parliament buildings with an impressive flight of eight locks and heads off in a south-westerly direction for 202 kilometres, ending up at Kingston on Lake Ontario.

The canal was built between 1826 and 1832 under the direction of Lt. Col. John By of the Royal Engineers. Following the 1812 war with the United States, the canal was designed for military purposes to provide a route to Lake Ontario and the interior of Canada which avoided a stretch of the St Lawrence River that bordered on the United States and would have left any troops or supply ships vulnerable to attack or blockade by the Americans.

Although it was a remarkable engineering achievement, its construction exacted a heavy toll in human life. It is estimated that around 1,000 workers (mostly Irish labourers) died during its construction from a combination of accidents and disease (mostly malaria).

In the end the Rideau Canal was never needed for military purposes. However, for several decades after its construction, it was extensively used to carry freight and passengers.

This commercial use reached its peak around 1860 and was starting to taper off by the time of this drawing, being displaced by navigational improvements to the St. Lawrence route and by the advent of rail, and later road, transportation. In more recent times, the canal has experienced a new lease of life as a venue for pleasure craft; while in winter a 7.8-kilometre stretch in Ottawa has become a magnet for skaters and claims to be the world’s largest skating rink.

In 2007 the Rideau Canal was designated a UNESCO World Heritage Site.

After the construction of the canal the fledgling settlement that it helped create was named Bytown in honour of John By. In 1855 it was incorporated as a city and was re-named Ottawa, from the indigenous Algonquin word adawe, meaning “to trade”.

By 1876 its population, spurred by its designation as Canada’s capital, had reached almost 25,000. Today its population is around 1 million with a further 300,000 on the Hull/Gatineau (Quebec) side of the river.

At the time of this view Ottawa and Hull were still very much lumber towns and the piles of sawn lumber are clearly visible along the river in the centre and right of the picture. These lumber piles later proved to be a major hazard, fuelling a fire which destroyed two-thirds of Hull and one-fifth of Ottawa in 1900.

At the time Ottawa was divided into two main sections separated by the Rideau Canal. The section to the left of the canal in the picture, (with the exception of Sandy Hill, its most southerly district) was known as Lower Town and was populated mostly by French Canadian and Irish Catholics, many of whom lived in abject poverty.

The more affluent Upper Town, to right of the canal in the picture, was mainly Protestant and populated those who could trace their ancestry to Scotland and England. The street layout in both areas follows the grid pattern characteristic of North American cities before the age of the automobile.

Although they have been largely rebuilt, most of the streets shown in this view still exist today. Col. By had the foresight to set aside some of the land near the canal entrance for public use. This not only included Parliament Hill to the right of the canal, but also two areas to the left, which appear clearly in the diagram looking a bit like a giant exclamation mark.

Both continue as parkland to this day and are now known as Major’s Hill Park (immediately to the left of the canal entrance) and Nepean Point, which juts out into the Ottawa River just below it to the north.

In many respects the Ottawa of 1876 would have been very different from the clean, orderly, attractive and relatively prosperous city it is today.

The unpaved roads would have been muddy or dusty during the summer and clogged with snow in the winter. The continuing dominance of the lumber industry meant that the city was dotted with piles of lumber, woodchips and sawdust and was carved into pieces by the railway lines that were needed to transport the products of its many noisy saw-mills.

Living conditions in the poorer parts of the city were insanitary, with garbage thrown into the street, no doubt to be mixed with the horse droppings. There were no sewers yet in operation and in many cases water was still delivered by cart.

These conditions took their toll on the health of the population, creating a breeding ground for contagious diseases and resulting in high rates of infant mortality. There were occasional outbreaks of smallpox and cholera. Admittedly, things were no different in many cities of the time and Ottawa may, in fact, have had better record than many.

However, by 1876 things were beginning to turn around. The first police were appointed in 1866. In 1874 the first waterworks began operation and a start was made on sewer construction. The same year also saw the establishment of a professional fire brigade.

A system of horse-drawn streetcars was established in 1871, to be replaced by electric streetcars starting in 1891. Electric street lighting was introduced in 1885 and the first paved street appeared in 1895. A more modern city was beginning to emerge.