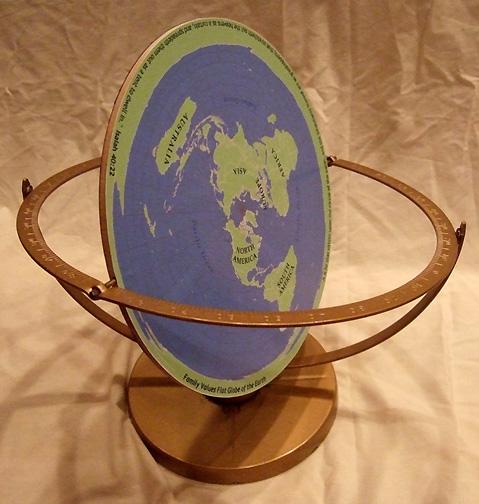 Most people accept that maps use a variety of projection techniques to render the 3D Earth onto a 2D plane. And that globes show us what the Earth really looks like.

However, flat Earth societies don’t buy this whole 3D/2D divide and believe (seriously or not) that the Earth is flat.

The modern movement can trace it’s heritage back to Samuel Rowbotham, whose 1849 16 page pamphlet and 1881 book Zetetic Astronomy: Earth Not a Globe make the case for a flat Earth.

It, “…models the Earth as an enclosed plane centered at the North Pole and bounded along its perimeter by a wall of ice, with the Sun, Moon, planets, and stars moving only several hundred miles above the surface of Earth.”

Other Flat Earth believers take inspiration from the bible which mentions “the circle of the earth” (Isaiah 40:22).

In any case, you can learn how to make your own Flat Earth Globe here on the Making Maps website. John has also published a wonderful book: Making Maps (Third Edition): A Visual Guide to Map Design for GIS for those wanting to create their own maps.

And if you’d like to learn more about flat earth “beliefs” have a look at the following books and maps:

Enjoy this post? Please help us by sharing it.