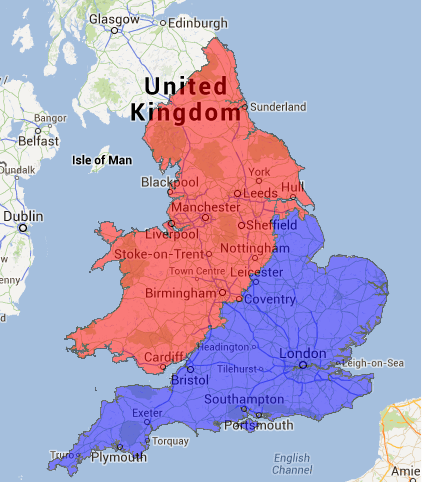 The map above shows the “border” between North and South in England and Wales (Scotland is even further North) based on a 2007 study by the University of Sheffield.

For those who don’t live in the UK, the reason for the why the map is controversial can be best summed by this comment from reddit user Flewbs:

The North-South border is extremely well-defined, just ask any Northerner and he will gladly tell you that ‘the South’ is everywhere immediately south of where he happens to live.

The map was originally created for a an exhibition at The Lowry gallery in Salford called “Myth of the North.”

Danny Dorling who helped create the map added the following information to accompany the map:

The country is best typified as being divided regionally between the north and the south. Ideas of a midlands region add more confusion than light.

The line that separates the North from the South is fractal. The closer you look at it the more detail you see. It weaves between fields and houses. That such an exact line can be drawn is, of course, a fiction but it is also fair to say that moving from North to South is not that gradual an experience.

This is the line that separates upland from lowland Britain, the hills from the most fertile farmland, areas invaded by Vikings from those first colonised by Saxons. Numerous facts of life divide the North from the South – there is a missing year of life expectancy north of this line.

Children south of the line are much more likely to attend Russell group universities for those that do go to University (and they often go to the North to study!), a house price cliff now runs along much of the line, and, on the voting map, the line still often separates red from blue.

In terms of life chances the only line within another European country that is comparable to the North-South divide is that which used to separate East and West Germany. This is found not just in terms of relative differences in wealth either side of the line, but most importantly in terms of health where some of the extremes of Europe are now found within this one divided island of Britain.

By county the North lies above the old counties of Gloucestershire, Warwickshire, Leicestershire and Lincolnshire and ‘nips’ only into parts of some of those counties. Most of each of those counties, and all the areas of England below them, are in the South.

By constituency the North includes and lies above the new parliamentary constituencies of the Forest of Dean on the north bank of the Severn; includes West and Mid Worcestershire, Redditch, Bromsgrove (and hence all of Birmingham), Meriden, Coventry South and North East, Warwickshire North, Nuneaton, Bosworth, Loughborough, Rushcliffe, Newark, Bassetlaw, Brigg and Goole, Scunthorpe, Cleethorpes, ending at Great Grimsby and the south bank of the Humber.

Scotland and Wales are part of the North, despite having managed to eschew the Victorian attempts to label them North and West Britain respectively.

To learn more about the North-South divide in the UK, the following books may be helpful:

What do you think about the map? Leave your comments below and share it with a friend who might diasgree: